So my newest romantic suspense is now out. 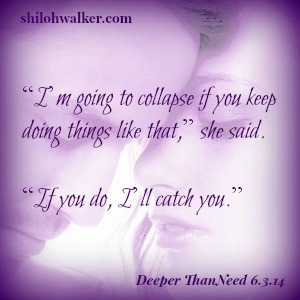 Even when she hadn’t realized she was that close to falling apart, he’d been there. Maybe now she wouldn’t have to bury her face in the pillow to keep from choking back the screams so she wouldn’t wake up Micah.

“Thank you,” she said, ignoring the erratic cadence of her voice as she forced herself to get the words out. “I know you had to hang around for a while, since you were down there, too. But you didn’t have to stay all day.”

The chains on the swing creaked and she heard him rising. Twisting the doorknob, she opened the door and watched as light spilled out onto the porch. She turned and faced him then as he moved closer. “I couldn’t just leave,” he said, a look on his face that told her he meant every single word.

“Some guys could have done just that.” She stepped over the threshold. Leaning against him had felt entirely too right. It was that odd little click thing, all over again.

He opened his mouth to say something and she lifted a hand. “Don’t,” she said, shaking her head. “I know plenty of guys who would have done just that, stayed just long enough to take care of whatever had to be done with the cops and then they’d disappear. It’s probably just human nature. You didn’t have to hang, but you did. So thank you.”

“If you think that’s human nature, then you know some really lousy humans.” He gave her a tired, sad smile and shook his head. “We can be selfish creatures, I know. But that selfish?”

Trinity suspected selfish didn’t even touch on some of the traits she’d come to expect in people. Shifting her gaze to stare off into the night, she licked her lips. “Look, I just . . . well. I wanted to say thank you. I did. Now I’m going to get some sleep.”

She ducked inside before she could say anything else. Before she could do anything else. All she really wanted to do was go back outside and lean back against him; maybe even wrap her arms around him and then push up on her toes and see what he’d say if she pressed her lips to his.
What he’d do.

One Reply to “Deeper than Need… now available!”