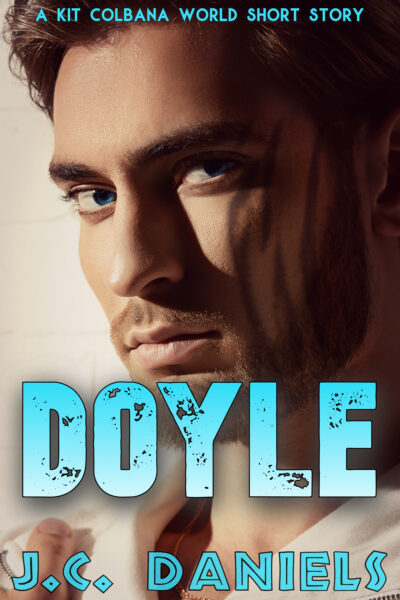 Always on the outside, even in a clan. Now, as his dominance grows and threatens to spill out in a wave of violence, he might have to choose between staying with the only family he's ever known, striking out to lead a solitary life or spill blood of those loyal to the clan...and the few he calls family.

follows the events of Haunted Blade and Haunted Magic

“Don’t you talk to me in the tone, Doyle. I’ll reach over this table and smack you across the head,” she said, temper snapping in her voice. “I’m not asking so I can run and rat you out. I’m asking because this is the third fucking fight you’ve been in this month—even for a shifter of your dominance and age, that’s a lot. I’m worried.”

Clenching my jaw, I looked away. “I’ve got it under control, Char.”

Swearing, I got up and started to pace. The tiger pushed close to the surface and I stopped by the window, staring out over Char’s lush landscape. Her position as Healer paid well.

She was trained as a medic, too, and the Assembly paid her a monthly retainer so she’d be on call in the event of disaster or emergency. Lately, there’d been a lot of both in the city. Florida had an entire season dedicated to shitty weather so there were usually any number of disasters where her services were requested. She had a fair amount of disposable income and invested it in her home. It showed. There were times I came here and used the key she'd given me just so I could sit her backyard and meditate. The meditation shit was something both Chang and Kit were teaching me. It was boring as hell and I hated it, but it did work to help leash the tiger and soothe the rages I’d dealt with for most of my life.

But no amount of meditation would rid me of the aggression.

“The fights are inevitable at this point, Char,” I said, admitting the truth out loud to the first person outside of Chang.

He’d been the one who had made me realize it and I’d still taken forever to accept it.

The room behind me went silent, Char’s breath freezing in her lungs until I couldn’t even hear it passing in and out now. I heard the hum of the fridge and the air conditioning circulating, the rapid beat of her heart as it kicked up in response to what I’d told her. Then, in a burst, she exhaled. There was the soft swish, swish, swish of the pale purple pants she’d pulled on with a breezy crop top that left two inches of her soft, round belly exposed, then she was behind me.

Turning to her, I met her gaze.

Her brown eyes were almost black and she had her lower lip caught between her teeth as she wrapped her arms around her middle.

Cracking my neck, I looked away.

She shoved me lightly. “Answer me!”

I caught her hands, held them trapped against my chest. The fear in her voice broke my heart. I pushed the knowledge aside, because thinking about it meant thinking about what she’d come to mean to me and that was dangerous—for both of us, and unfair to her if everything ended happening the way it probably would later on down the road.

“How inevitable?” she said again and this time, she was the one with the growl in her voice.

“From what I’ve been told, within the next decade, there will only be two cats in the Clan with more dominance than me,” I told her.

Her eyes widened and for a second, she swayed.

“Hey…” Grabbing her hips, I steadied her. “Breathe. Now.”

But she’d already steadied. “Damon is one, I guess. And judging by how antagonistic you are with Scott lately, I’m assuming he’s not the other.”

“Scott’s not one of the two strongest in the Clan, sugar.”

Tiny lines appeared around her eyes as she closed them, understanding coming.

“Who have you talked with?”

“Who else?” Sighing, I lowered head and nuzzled her curls, then eased back and met her gaze. “Chang. He told me a while back, but it took a minute for me to process it, then deal with it. Me being a tiger…well, that both complicates things and makes it easier.”

She cocked her head, eyes narrowing as she considered how being a tiger might make things harder and easier at the same time.

Only somebody who either was a tiger shifter or had some understanding of how different tigers are could get it. But Char was our Healer and she’d been in the Clan when my aunt was still alive. So she had some idea.

Tiger shifters weren’t exactly commonplace in the US—or much of anywhere outside India and a couple of remote groups in Asia.

My dad and aunt were misnomers, direct descendants of a Samoyed girl who had been kidnapped and brought into the US in the 1800s. The guy who kidnapped her hadn’t realized she wasn’t human. If he had, no doubt he have found another indigenous tribe to prey upon. The dumb bastard fucked around and found out, ended up dead and bloody when the girl’s family tracked him down. It took a while—money still made things easier even centuries ago.

On their way to tracking down the white man who stole their baby girl, the Samoyed family bloodied and broke a lot of people and they decided it was safer to just stay in the new country. Some of their tribe followed over the years and most of the Amur tiger shifters in the US are their descendants.

I don’t look like I have Samoyed blood, but that was…fuck if I know how many generations back. The only thing about me from that part of my ancestry that holds true are the tiger shifter genetics.

“You’re solitary by nature,” Char murmured softly. “But the duality of having human blood from your dad’s mother and whatever genetic material your birth mother gifted you with, that alters the balance. You’re not one who craves—or thrives—on total solitude. In fact, you need a…balance, a measure of independence outside the Clan structure while still finding the support from the Clan itself…and your Alpha.”

Not surprised she’d nailed it so quickly, I shrugged. “More or less. Chang…” I stopped, not certain I wanted to share what the man who was, in all ways that counted, a second father to me—or maybe I should consider him a grandfather—many times removed.

Rubbing the back of my neck, I debated. It wouldn’t be a bad thing to have somebody else know about this, somebody I could share it with—and I couldn’t tell Kit. She’d explode if she knew the shitty way I had to deal with the boiling aggression brought on by the building dominance inside me. But…

“If I tell you, can we consider it…” Running my tongue across my teeth, I wondered if this was going to make me seem like an asshole.

Char arched a winged, black brow, her full lips curving in a cynical smile. “Can we consider it a private conversation between a Healer and a Clan mate dealing with a private internal struggle? Sure, considering that’s what it is. Since nothing you tell me is going to be anything I’d consider a threat to the Clan’s health, I won’t feel obligated to report it—and, should I ever feel that’s the case? I’d go to Chang or Damon. Never Scott.”

Our gazes locked, clashed, while my face heated. “He isn’t my adversary, Char.”

“No.” Her voice softened, but the intensity in her voice only deepened. “But he’ll become yours once he realizes you’re a threat to him.”