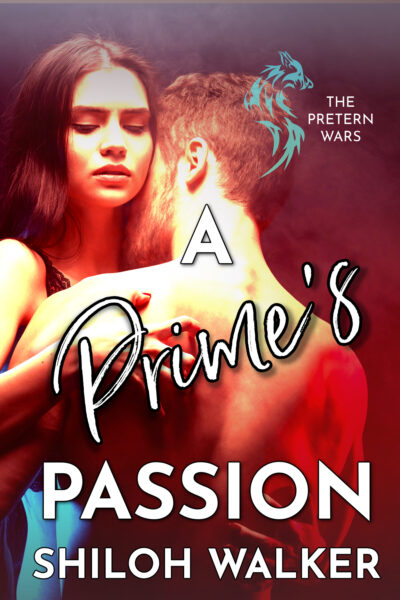 In her world, the strong were broken young or they didn’t survive. Eyes down, little wolf, Zee’s father would say. You aren’t strong enough yet.

Zennia Day kept her eyes down and stayed quiet, knowing that one day, she’d escape.

When her chance comes, she finds herself on a road that takes her far from Massachusetts, all the way to North Carolina.

She has her eyes on the future…until she meets Niko, a dominant Therian male and future Prime. When she looks at him, instead of a challenge for dominance, Zee sees a promise of forever.

Niko charmed her, teased her…and stole her heart. Mere days later, after making a public, permanent claim, he crushed that same heart in his fist, tossing her aside in front of the entire world and casting her out of pack lands.

Ten years later, she's an outcast, living far from her own when she gets word her father is dying.

She can do nothing—she was banned. Violating Niko’s order was to court punishment, even if it was just to tell her father good-bye.

The blunt words almost had him on his knees until Niko realized his second-in-command wasn’t talking about Zee, but her father.

No Therian is ever left to die alone, so Niko sent orders the Day family to come home.

Niko is unprepared for Zee’s message. I have no pack. I have no home.

The words leave him shattered.

Realizing what he’d done in his rage, Niko pushes harder for answers. It doesn’t take long to discover that what he’d heard a decade earlier had been based on lies. Because of those lies, he’d thrown away the love of his life.

Zee’s been paying the price ever since.

Now he must mend a heart he’d broken...and convince her to give him one more chance.

“Zee? Is something wrong?”

The nervous butterflies in her belly had migrated up to her throat and she had to clear it twice before she could speak.

“Don’t tell me what I mean, what I want, what I know, what I need,” she bit off. “I’ve been alone and without pack, without touch,” without you, “for too damn long and I’m slowly going crazy. There isn’t exactly a high prevalence of wolves or other Therians in the Cape but somehow, any damn time I came close to hooking up, one of your friends somehow managed to be in the area and whatever man I was with decided it wasn’t worth having his gut ripped open, fighting for the right to touch me. Which is a fucking laugh—you threw me away. But Therian men do stick together. I all but have a sign pasted to my forehead. Property of Prime Whelan. And it won’t get any better when we get to Durham-Starfell. I need sex.”

His heart was pounding, hard and fast enough that she could hear it.

Her face was flaming, the visceral humiliation she felt at having to practically beg him to touch her almost enough to send her running again.

“I will not go back there and have every damn Therian I come across scent my need on me like I’m a bitch in heat.”

He shoved off the door and closed the distance so fast, she never saw him move.

Anger was a fire in his eyes, but when he touched her, it was with a gentle grip on her chin.

“Nobody will disrespect you. I’ll see to it,” he said, a snarl quivering under his words.

“Maybe not out loud. But you can’t control how people think.” Reaching up, she closed her hand around his wrist. That light touch had her clamoring, begging for more. “They’ll look at me, realize my…dilemma, and understand that you still won’t touch me.”

Niko’s mouth went flat. “If you think I don’t want you, you’re not paying attention.”

“Then what’s the problem?”

“You…” He stopped, letting out a sound that was uniquely him, uniquely Niko. It spoke of the beast that was a meld of his ancestry, and of his frustration.

And of his resistance to the very idea of touching her, Zee thought, a cold knot forming in her belly.

“What do you want, Zee?” he demanded.

“I already told you. Take me to bed. Seduction or tenderness isn’t required.” He probably no longer had any desire to use either with her. Fine. The shape she was in, she didn’t need it anyway. And if it broke something inside her to acknowledge that, well, what was one more broken piece among the hundreds that made up her heart?

“So you think I should just shove you against a wall and give you a fast, hard fuck?” The disbelief in his voice was echoed on his face.

Studying him, Zee realized this had been a futile hope.

Turning on her heel, she walked back to her room.

She closed the door and went to the suitcase she’d put in the closet on the provided stand. Unzipping it, she pulled out a pair of jeans.

Niko wouldn’t give her what she needed, but she was done letting the sexual hunger drive her insane.

There had been plenty of men in the lobby bar and she hadn’t scented any other wolves besides her and Niko.

She didn’t care if she had to drag somebody into a public bathroom.

She wasn’t going to fall asleep with the viscous, pulsing ache another night.

If his cock was any harder, it would have punched a damn hole through his jeans.

Sitting on the bed, gripping the edge with hands that had gone clawed, Niko tried to breathe through a haze of lust so powerful, it threatened to shatter what pitiful control he’d managed to maintain.

Take me to bed.

The fuck it wasn’t. Seduction and tenderness were just two of the things he owed her, two of the things he intended to give her. He wanted to…hell, he couldn’t expect her to trust him again any time soon, but this bitterness…how could he touch her with that between them?

And yet there was truth in the words she’d spoken.

They’ll look at me, realize my…dilemma, and understand that you still won’t touch me.

The thought of anybody looking down on her, of anybody pitying her, sneering at her, or laughing at her, all of it made him want to tear things apart with his bare hands.

So caught up in a haze of anger, need and want, he didn’t pay much attention to the creaking sound that was a door.

But then there were footsteps.

Zee, he thought, uncurling his hands from the bed.

The lost look in her eyes right before she’d turned away had gutted him.

Did she really think he didn’t want her?

Rising, he moved to the hall, her name already forming on his lips.

The sound of another door had him going predator-still.

The door to the outer hallway.

He was in the main area of the suite before she had it fully open.

She looked at him over her shoulder and he came up short, his brain short-circuiting as he took in the sight before him.

She still wore the thin white button down shirt she’d had on earlier—and she still had no bra on. He could make out the darker circles of her nipples and both his mouth and hands itched to touch, to taste. The shirt was tucked into a pair of skin-tight jeans and she had on a pair of sky-high red heels that matched the lipstick she’d put on. Her eyes were made up to look all sexy and slumberous, while she’d pulled her hair into a messy topknot that left the delicate, elegant arch of her neck bare.

Sucking in a breath, he rasped, “Where are you going?”

Before she could slide from the room, he caught her arm.  She weighed less than nothing to him and he had her back inside, his back braced against the door before he even thought through his reaction.

“If you want a drink, there’s a fully-stocked bar here.” He angled his chin in the direction of said service.

“It’s not a drink I’m after,” she said bluntly.

The possessive animal heart of him snarled in outrage.

Zee curled her lip. “That decision isn’t yours to make. Please move.”

He moved. Toward her.

Plunging his hands into her hair, he arched her head back and slammed his mouth down on hers.

She sucked in a gasp, sealing them together more completely, their breaths becoming one.

Breaking the kiss, he painted a path down to her neck with his mouth and bit the arch where it flowed into her shoulder. “What are you after, Zee?”

She fisted her hands and rested them on his chest, her body trembling. “What are you doing?”

“Answer the question.” Tangling his fingers in her hair, he sent the remaining pins that had held the knot secured flying, then tugged her head back so he could look down into her flushed face. “What were you planning to find down in the bar?”

“You already know the answer to that.” Her lips were swollen but the lipstick must be quality stuff because it hadn’t smeared at all.

An image of her on her knees in front of him, those red, red lips wrapped around his dick flashed through his mind.

“You plan on finding some stranger to hook up with?” he asked, and even though he had no right to her loyalty, some part of him was devastated. “That’s really all you need? A quick, hard fuck?”

“I’ve learned to live without most of the things I once thought I needed, Niko,” she said. “I get by on what’s necessary to survive. And yes, a hard, fast fuck is all I’m out for.”

Somehow, despite everything, despite the guilt he carried, despite the anger he had for himself, she’d just savaged him.

He wanted to shake her, demand she stop this—demand she look for more. Other words burned in his throat and he feared if he let them loose, he’d destroy any chance he might have at ever getting her to forgive him.

Burying the hurt, the anger, the confusion, he hauled her against him, then spun and pressed her to the door. Lips against her soft skin, he murmured, “Fine. If that’s all you want, who am I to tell you no?”