Raining down is today’s topic.  Nobody said it had to be actual rain, though. 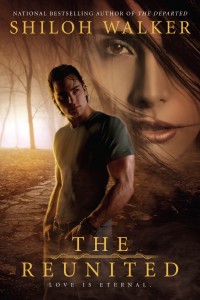 From The Reunited, due out in February

A hard run through downtown.

And when he got back to the hotel, Joss deliberately sat in the lobby for an hour.

Surrounded by people, listening to them come and go.

Dimly, he was aware of their thoughts.  The chaos.  It was like rain pounding against an umbrella he carried, though.  It didn’t leave him overwhelmed this time.  Finally.

It was an exhausting exercise and his head was still reeling, so he didn’t feel at all bad about missing the evening pow-wow in Jones’ room.  He headed to his, showered and crashed.

It was another night of deep, tormenting dreams.

He would have liked to fight but this time…the dreams reached up and grabbed him. Pulled him under.  Choking him…

Fuck all, the pain choked him, but it didn’t matter.

All that matter was that he get up.  Get on his feet and get her away from her.  Struggling to roll over, he clawed at the grass, searching for something to hold as he clambered to his feet.

But there was nothing–

Then there was something.

A hand.  Pressing on his chest.

Fine…No.  He wouldn’t be fine.  Everything was getting back and gray, his vision fading as he tried to focus on her face. “Amelie.  You must run now,” he rasped, grabbing her wrist and trying to blink away the gray clouds that wanted to hide her face from him.  “Run.  Get away…”

2 Replies to “Saturday Snippets… The Reunited”