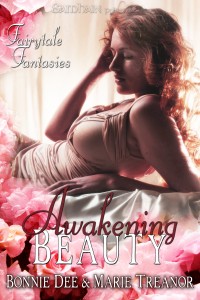 Bonnie: First, we’d like to you thank you, Shiloh, for hosting us on your blog and giving us the opportunity to take about the series of adult fairytales we’ve co-authored.

Marie: Why fairytales? Well, everyone loves them. The whole romance genre is based around the idea of living happily ever after with a handsome prince (or princes) of one kind or another. And it seems to us that every woman, including ourselves, has a special place in our hearts for the stories we were told as children. Only we’re not children; we have more adult expectations and understandings of emotions, trust, respect and, of course, sex.

Bonnie: So, for our first Fairytale Fantasy, Cinderella Unmasked, we explored what happens when Cinderella grows up a little and learns that “happily ever after” isn’t as easy as a kiss and a walk up the aisle. Several years into her marriage, King Charming has abdicated the throne and run off with someone else, leaving Queen Ella to rule the kingdom. She’s exhausted from the chore and relies heavily on her chief steward and best advisor, Sebastian. Ella is ready to live again and to experience the sexual pleasures Charming had never been able to give her. She decides to hold a masquerade ball where she’ll indulge herself with a stranger. One ball turns into three with escalating levels of sexual exploits. But are these dalliances enough to satisfy her? And who is the masked man, or men, who’ve fulfilled her wildest sexual fantasies? 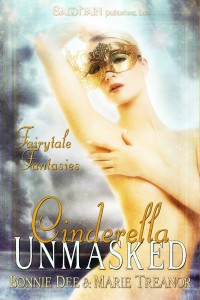 Marie: Demon Lover is a darker story, a combination of the Rumplestiltskin tale and the myth of Persephone. To an adult, the behavior of the king, who’s supposedly the “happy ever after” of the poor miller’s daughter, is greedy and unattractive in the extreme. How could anyone be happy with him? And then, what motive might Rumpletiltskin have had to help her spin the roomful of straw into gold? Why did he want her child?

Faced with the impossible task of spinning a room full of straw into gold by morning, Gwyneth despairs until a black-garbed figure appears and says he can solve her problem for a price. One kiss. For three nights the stakes escalate and Gwyneth’s attraction to her mysterious visitor deepens. But when he claims the ultimate price of her child, she realizes she’s made a deal with the king of the underworld and Gwyneth journeys to the land below and makes a new bargain to free herself and her daughter.

Bonnie: Our latest Fairytale Fantasy is Awakening Beauty, also from Samhain Publishing. Take a guess what fairytale it’s based on.

So what if our Beauty fell asleep not for a hundred years but a thousand? And woke up not to the kiss of a handsome and romantic prince but to the shake of a decidedly unromantic and down-to-earth workaholic “prince of industry” in something very like our modern, egalitarian world?

The hero, Joel Thorne feels as if he’s been sleepwalking through life. Wealth and success are his; now he’s at a crossroads. During a mountain hike to clear his head, he discovers a castle overgrown with thorns and, inside, a beautiful sleeping woman. When Princess Aurora opens her eyes, Joel’s face is imprinted on her heart—then she’s swamped with grief and loss. An evil fairy tried to take her pure blood to gain power and she’s been asleep for a thousand years. Worse, she’s been erased from history and from the memories of all she loved. What future does she face? 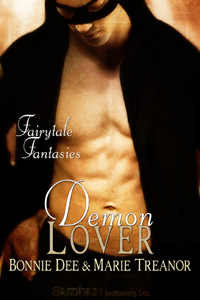 These stories are the result of our collaboration, but we thought we’d talk a little about how our joint writing process works. Marie, any thoughts?

Marie: Well, my first thought is actually how well it’s worked out! At least from my own point of view! When Bonnie first suggested the collaboration, I was decidedly nervous because I’ve always worked alone – I don’t have crit partners or beta readers, and the first person who usually reads my work is the editor I submit it to. I was a little worried Bonnie and I would want to take the story different ways or that we’d annoy each other with criticisms the other didn’t think were valid.

But I’m happy to say none of that actually happened! In fact, rather to my surprise, collaborating helped the creative process – I found it both novel and inspiring to discuss characters and plot developments with someone who cared for them as much as I did. And I found any “criticism” was not only valid but a necessary part of our joint effort to make our story as good as it could be. In fact, I’ve learned a lot from the way Bonnie works as well as the way she writes – she’s a very experienced as well as an extremely talented writer.

So, how do we write together? In each case, Bonnie has come up with the basic idea and written the opening pages. We bat various old and new ideas back and forward between us to see which work best for both of us, and the story begins to grow like magic J. We take it in turns, writing a chapter or two, either until we run out of steam or until it seems a natural place to stop, and then send it to the other, who goes over what’s just been written, gives her views on it and writes the next section.

Of course, some stories have flowed faster than others, and we’ve had to fit writing them around our own solo commitments, but I admit I’m really proud of the way they’ve turned out. I like to think that far from taking the magic out of these well-loved tales, we’ve added a new layer of our own.

Bonnie: Marie always has an innovative idea for working the plot past a sticking point. It’s a great relief to have another brain hammering out the details of a story. Together you can throw out dozens of ideas, no matter how outlandish, and see what works. Sometimes a direction you would never have thought to take the story on your own is exactly the right thing to do. And it’s such a pleasure to receive the document back in your inbox and simply be able to read a chapter or two that seems to have spun out all on its own. I’m able to enjoy it as a reader, thinking “oh, so that’s why she’s like that” or “what an exciting action scene I wonder what happens next.” Then I remember that I have work to do and I’m usually inspired to drop whatever else I’ve been working on and carry on with “our” story.

Everyone has played the “add on to an ongoing story” game at some party or other. Usually somebody throws in random stuff so the tale quickly jumps the rails and becomes like a badly told child’s dream. It’s not like that with a writing partner—IF you’re on the same wavelength. Then you start to flow together. You both have to be willing to deviate from the original general outline and most importantly, you have to be willing to give ground. So what if the story isn’t heading exactly where you expected? That’s the joy of it. My feeling is, if I’m very attached to an idea, I’d better write it as a solo project. But once I’ve begun a collaboration, I must throw out my control gene and be willing to let things evolve—the secret to any relationship romantic or otherwise.

Marie: Many readers have expressed to us how much they’ve enjoyed both Cinderella Unmasked and Demon Lover. We hope people will appreciate Awakening Beauty, a fish out of water story of Princess Aurora in modern times. We certainly enjoyed writing it. And thanks again, Shiloh for hosting us at your blog today.

All of the Fairytale Fantasies are available at Samhain Publishing and many other distributors.
Bonnie & Marie are giving away a download of Awakening Beauty.  Open internationally.