From an indie…a Hunter’s story, a very short one.  Nooooo, this doesn’t mean I’m going back to doing Hunters in ebook.  Sorry, this was a special group thing and it just worked out that way. Due out in May… 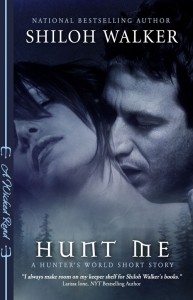 The low, rich purr of her voice was enough to have Drew Quentin shifting in the miserable, busted chair. He also had to fight the urge to smile as he reminded himself he’d decided to ends things with one Dakota Coulter, the sexy, mysterious brunette.

He wanted her, he was halfway in love with her…and she refused to so much as give him her damn phone number.

He could have handled that.

But the cop in him was a little bit disturbed by the fact that Dakota Coulter had a past that was just a little too mysterious. Oh, her background check held up—too well, actually. Something about her just had his instincts quivering.

She wouldn’t open up for him.

“Having a rough night, sugar?”