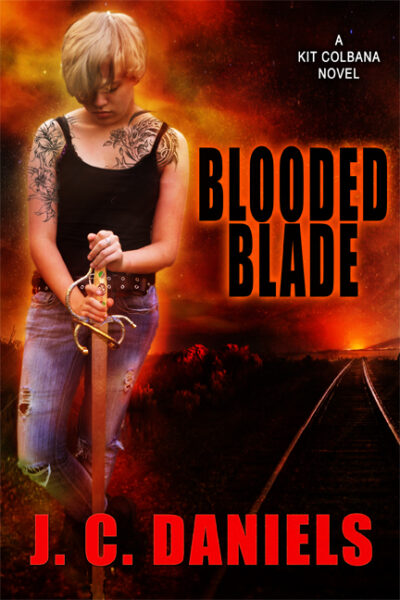 Kit Colbana—half breed, assassin, thief, jack of all trades. Master ofnone.
Or so she’d always been led to believe.Over the past few years, Kit Colbana has dispatched some of the worstthreats the non-human races could have imagined. Pandora—a mother ofmonsters. Puck, a father of nightmares. Jude, a vampire who nearly droveKit to the brink of insanity.Then there was the Lemera, an ages-old creature of myth, born from Kit’sown people, an unseen, undead assassin that hunts without rest, kills without remorse. Yet Kit walked away.Her grandmother’s pet assassin failed to kill her so Kit wasn’t surprised when yet another unwanted memory from her past shows up, looking to take her down. But her blood-hungry, homicidal aunt disappeared without a trace only hours after arrival.Is it a reprieve? Or something far worse?Kit’s lover Damon is keeping secrets. Her grandmother’s pet assassin, the Lemera, seems to have taken a liking to Kit. And her grandmother, Kit’s own worst nightmare, is haunting her dreams.They’re all on a collision course with fate and it can only end one way…bloody.

I had no way to tell, the only measure of time the thudding of my heart and his as he leaned into me, pinning me between him and the door, forearm bracing my weight at my hips, the other stroking the curve of my hip as he nuzzled at my neck.

I think I’d started to doze by the time he pulled out and swung me into his arms. Grumbling at the loss of his heat, I curled into his chest immediately. Damon rubbed his cheek against my hair but didn’t speak.

Even as he carried me over to the bed and lay down, stretching out with me tucked between him and the wall, I stayed quiet.

He shifted around, then the thin blanket covered us.

When he kissed my shoulder, I closed my eyes.

Long moments passed before he finally spoke. “You were on the Riordan job. How did it go?”

“He’s dead. I’m not.” Beyond that, I didn’t want to talk about it. Even thinking about the events after Riordan’s death were enough to make my arm ache, enough to make my brain freeze, as if preparing for an onslaught of alien whispers.

He turned his face into my hair and breathed in.

It took everything I had not to tense.

“I’m too tired to talk about this, Damon.” I burrowed deeper into the miserably thin mattress. “And considering how you’re holding back on me, it’s got you in a bad place to insist that we be open with each other, doesn’t it?”

The hand on my hip tightened and his body tensed.

But he didn’t get up, didn’t pull back.

Instead, he kissed my shoulder. “I love you. I’d die to protect you.”

I didn’t respond to that. I just said, “Don’t ask for my secrets until you’re ready to share yours. Now, I’m tired.”

He said nothing else, pulling me into the hard curve of his body.

And as angry as I still was, as hurt, tucked against him still felt like the safest place in the world.

I was asleep in moments.

Something nuzzled my nape.

Grumpy and tired, I shoved my head under my pillow. The soft brush against my neck came again, then stopped. Too sleepy to care, I shivered, then snuggled deeper into the pillow, pulling the arm around my waist more completely around me.

It didn’t help. I was still chilled.

Long moments passed as I burrowed closer and closer to Damon.

Eyes flying open, I jacked upright and spun around, one hand automatically flying up to press to Damon’s chest.

I shot a look around the room, spotted the shadowy corner where Lemera was shimmering into view, then turned my head around to focus on Damon.

My jaw fell open, because it wasn’t just Damon lying there—I was curled up right next to him, his hand snug on my hip. As I shivered and squirmed closer, he reached out, apparently still asleep and pulled on one of the thin blankets, flipping it higher up over my body.

I felt the scratchy brush of the fabric echo over my skin.

“What did you do?” I demanded, looking at the specter crouching in the corner.

“We need to speak,” she said, her voice a hollow echo—one that came from the grave.  “He…intrudes. Gets in the way.”

She didn’t hear the scathing mockery in my voice. Rising from the crouch where she’d been perched in wait, she lifted a shoulder. “He serves his purpose. Clearly, he loves you. He protects you. But I wish to speak to you, not your lover. Especially as he reeks with lies.”

The words turned my stomach. “Do you know anything about those? The lies, I mean?”

She angled her head to the side, eyes narrowed. Those eyes were more…real than normal. More human. She looked more human, even more alive than she had earlier. It was eerie as hell. No. It was fucking scary.

“I have…suspicions,” she said slowly, clearly taking her time to answer, although I wasn’t sure if it was because she didn’t understand how to respond or if she was reluctant to offer much detail.

Frustrated, I pushed off the bed and glanced back at him—us. “And is that why you’ve got me walking around in…what, am I dreaming?”

“You’ve done this before,” I said, mind spiraling back to a dream weeks earlier, when I’d come awake to find that I’d cut into Damon with that bronze blade bound to Lemera. She’d pulled me into a dream—or something. “Haven’t you?”

Her brows came together. “The dream paths have always been open to us. It’s easier to reach you this way. I’ve never had much luck reaching others of the blood like this. Not since…” She looked away. “Not for a very long time. But you are easy. It’s as if I reach out and you are there. The old ways are all but lost to the others. This displeases me.”

“What are these dream paths?”

The scowl deepened. “Did they teach you nothing?”

“No. They didn’t.” Hands on my hips, I scowled back. “I’m a half-breed disgrace or haven’t you figured that part out? The blood, as you call my so-called people, want nothing to do with me. My grandmother, her staunchest supporters, they all want me dead. I’m a mongrel—unclean blood—human blood.”

“You are not unclean.” Lemera sniffed derisively. “The queen has kept the bloodline…limited. It weakens us. But not you. Your human blood makes you strong.”

I gaped at her. Then I started to laugh. Falling back against the wall, I laughed and laughed, unable to stop, even as her disproving glare cut into me. “My human blood is the reason I was kicked around like a dog.”

“No.” She came closer, her steps liquid and graceful, like her bones were made of something altogether new. “Your human blood gave you unique strength, but it also made you…stubborn, child. The queen, the one you call grandmother, wanted you broken before you grew into an adult.” Now she smiled and the teeth that were once broken and rotten were full, the right front one slightly crooked, while the bottom left showed a slight chip. Those two imperfections made her seem so…human. “She failed. She wanted nothing more than to move on, but she cannot and now she hunts you with desperation.”

Something about that statement struck a chord. I had no time to probe for more because Lemera took my hand and pulled. “Come. We must talk.”

The world spun away and reformed. My head whirled crazily when it was done and we stood on a narrow, two-lane country road, the kind that had been neglected by the local and federal government for so long, it was in a state of disrepair that left it almost unusable.

Trees thick with Spanish moss dripped over the stretch of busted pavement, deepening the darkness and giving it an eerie feel.

The sound of my own voice made me jump. I sounded like I was speaking from the depths of a well.

She turned around and began to walk. “Presently, we are still in your room at the place where you let people pay you poorly for jobs that nearly kill you. This is a dream path—an echo, I believe you might call it. I found it while searching for the one they sent to take you back to the fouled queen.”

“You’ve said dream path twice, like I’m supposed to know what that is.” I wrapped my arms around my mid-section, hugging myself. It didn’t do anything to ease the chills. “I don’t.”

“You’re a smart child.” Her perfectly imperfect teeth flashed in another of her disturbing smiles. “You can work it out. This isn’t…real. It’s an echo—a thought that’s no more.”

“You mean a memory?”

“Yes.” She turned the word over, then nodded. “A memory. I found this while searching for Reshi. She has hidden herself from me.”

The cold uneasiness in me grew. “Why are you looking for her? Didn’t she return to the Hall when she left Florida?”

“She never left.” Lemera’s eyes met mine. “And…something in her isn’t wholly Reshi.”