Do you remember a few weeks ago, I introduced you to this year’s first contender for 2019 Douchery of The Year Awards? Jimmy Thomas came in strong, showing how he was the TOP douchebag.

But with all the current fiascoes, I think he’s feeling insecure and had to make another showing. He CLEARLY doesn’t want to have people like #copypastecris nudge him out of contention, because he went ALL OUT for this one. 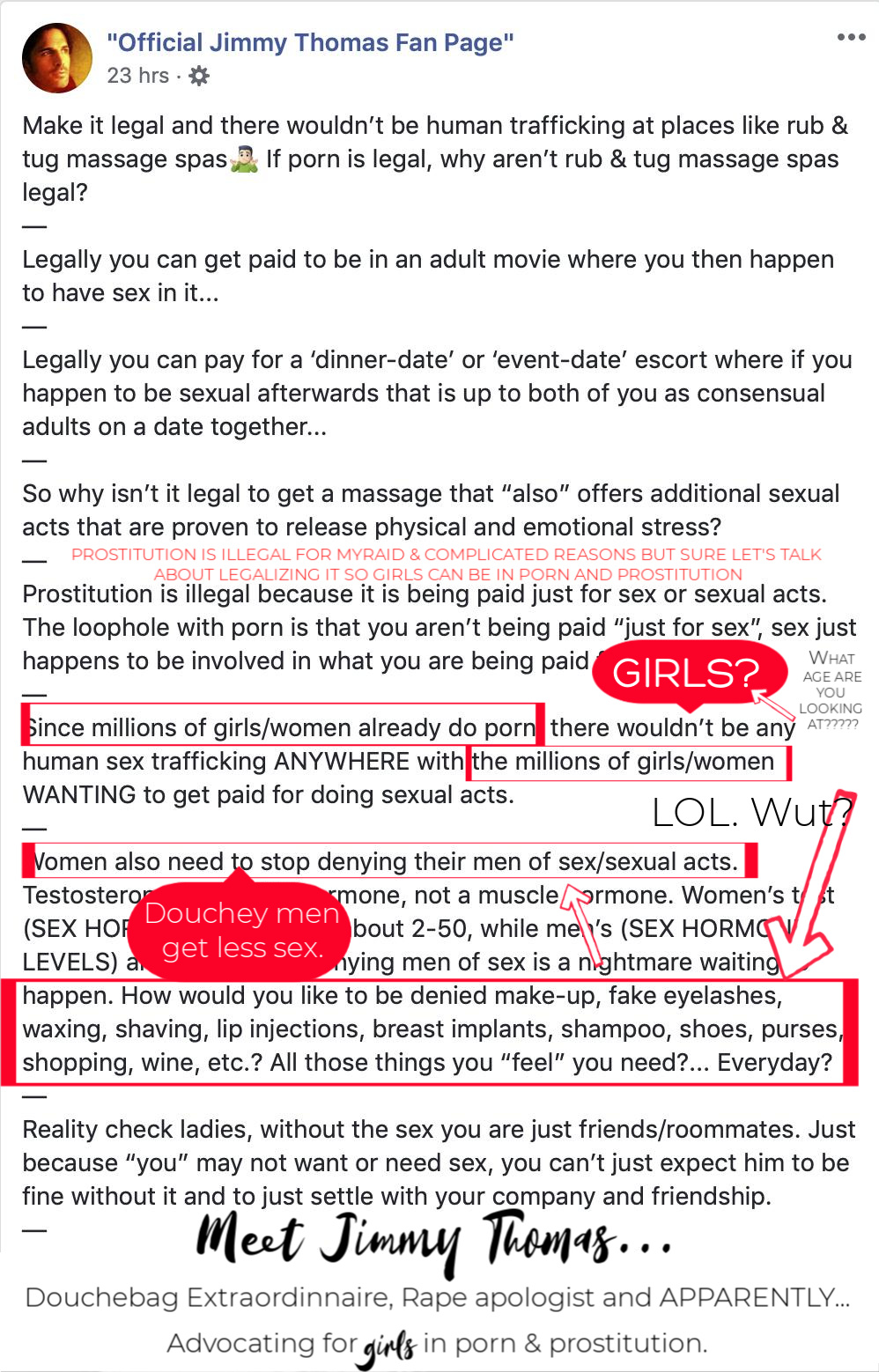 Where to we start?

I mean, setting aside the political arguments of legalizing the sex trade, let’s look at his language.

1a: a female child from birth to adulthood

Let’s look at that. Adulthood is generally recognized as the legal age of 18, right?

You hear the word girl, you think kid. Right?

So is this guy really suggesting an acceptance of girls in prostitution? Whether they are okay with it or not, it’s not fricking okay. It happens because of predatory assholes and because of demand. That doesn’t make it acceptable.

Then he keeps going by suggesting millions of women and girls want to have sex and get paid. We’ll ignore the women part, because there are women across the globe who engage in the sex trade willingly and that’s not the issue.

But he mentions several times over, and separately…GIRLS.

It’s like he keeps pointing to the fact that GIRLS, those who are NOT LEGAL ADULTS and YOUNG ENOUGH TO EASILY BE TAKEN ADVANTAGE OF, should be able to participate in the sex trade!

JIMMY, IF THAT IS YOUR THINKING, YOU’RE NOT JUST A DOUCHEBAG, YOU’RE AN EVIL EXPLOITIVE DOUCHEBAG.

That’s the worst, but it’s not it.

He also goes on to make it clear that women *owe* men sex.

Yes. Let’s equate a MAD NEED TO RIP OUR BODY HAIR BY THE ROOT to a desire for sex. Except, well, I’ve never met a single woman who woke up with a female version of a woody to roll over, grab her…waxing kit and let  ’em rip. BECAUSE THEY DON’T EXIST.

Surprising NOBODY, it appears Jimmy has already deleted his latest epic rant, but the internet remembers everything.

Here’s something else for it to remember. NOT ONLY IS JIMMY AN EXPLOITIVE DOUCHE, HE’S A DUMB ONE.

5 Replies to “A break from Hot Takes and you’re gonna hate me for this one… Jimmy, you douche.”