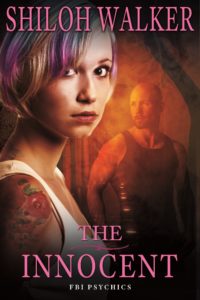 The Innocent – An FBI Psychic Novella

There’s only one reason Jay Roberts would set foot in a middle-of-nowhere town like Hell, Georgia. She’s got a bone to pick with her sort-of boyfriend. They only met online, but things got hot and heavy before their cyber link went silent.

She’s here to get in his face for an explanation. But no touching. Her psychic abilities make physical contact…complicated. Yet something about this relationship made her think things would be different. She’s not in Hell twenty minutes before bad vibes have her skin crawling.

Corruption has stained the very fabric of Linc Dawson’s town, and now it’s stolen something very dear to him. The last thing he has time for is nursing Jay’s broken heart.

But Jay isn’t going anywhere. Not only because she’s not giving up on him, because she’s got access to the kind of backup nobody wants on their bad side. And Linc discovers the woman who’s afraid to touch him could actually be his best chance. At salvation, at hope, at life. Maybe even love…

Warning: This book contains a not-so-naive virgin, a pissed-off former cop, lots of frustration, if you know what I mean, and more trouble than either of them know what to do with.

The relief that hit him was almost devastating. Head swimming, he collapsed back against the window sill, clutching her against him. “But you… Morgan…”

“My boss.” She rested her brow against his chest. “I had a feeling there was going to be trouble and she sent Taige here to help me cover my ass. Linc, there are some big-ass problems going on here and I need to know what’s going on with your daughter.”

He stared at her face, her eyes, vivid and intent.

The tension, the fear that had been mounting in him for the past hour—more—felt like it abruptly drained out of him. A little pop practically sounded in his ear and he sagged, hauling her against him, uncaring of the blood that stained her shirt. It didn’t matter.

He had a reprieve.

He was a cop and he knew what the truth was, knew it waited for him.

But that wasn’t why Jay was here.

All that frustration and fear came out of him in a shaking sigh and he slowly lifted his head, stared into her eyes.

Then, focused on just one thing, he nodded. “That’s not why you came.”

She touched his cheek. “No.”

Eyes closed, he pressed his brow to hers. Everything else could wait. He drew her body against his, breathed in the warm, soft scent of her. Right now, this was all that mattered. He could have one night where he pushed everything to the side…right?