I like making the headings short and to the point.

In a week, CANDY HOUSES will be back in ebook…the first in the Grimm’s Circle series.  If you like a sexy Grimm fairy tale with a lot of twists…maybe check these out. 😉

Speaking of the Grimm…the First Book of Grimm is out of print and will stay that way in until the the rights to the second book revert back, which will be in 2018. As mentioned, I’m going to recover and reissue all of them with a more paranorma/urban fantasy sort of cover, but the stories themselves aren’t changing.  I’m just updating the covers…and adding the UF pen name to it. 😉

This was one of the best cons I’ve ever been to, hands down, and it was the inaugural event. The SBC ladies went above and beyond and I had so much fun.

Of course, my asthma kicked me in the teeth, but hey…I still had fun.  I took my kids because, hello, Orlando and an updated Harry Potter world couldn’t be overlooked.

Diagon Alley and Escape from Gringotts were amazing.  I also went to Halloween Horror Nights, which was fun, but I’m a haunted house snob, so I was…well, I’ve been to scarier. Much scarier. Still, I went with readers and we had fun and we talked, so that was the best part.

The event itself started Friday and ended Sunday, although I left early Sunday.

Saturday was an epic signing. I mean…epic.  I’ve been to signings where I’ve been busier, yes…but that would be at someplace like…RWA. Turn The Page. RT.

It was organized and the SBC people had food on hand for the authors, as well as ‘author concierges’ who went around to check and make sure the authors were doing okay. When I needed to slip away for a few minutes, my concierge would hang out at my table and let the readers know I wouldn’t be gone long…loved it.

There were cocktail parties and costume parties that could also be attended and I did attend the cocktail party (a VIP extra) for a bit and then peeked into the costume party but I can’t speak too much about them because  I was on oxygen conservation mode for most of the weekend.

In short…excellent event and I’m already signed up for next year. 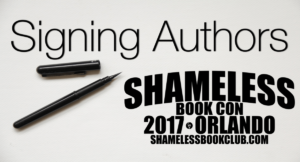 So for next year, I’m already down for