This book has been previously published…from the publisher that shall be named…and I’m reissuing it today at a price that people can…gasp…actually afford!

FYI, no new material has been added, but there are TWO bonus stories….BACK FROM HELL and NEBULOUS. 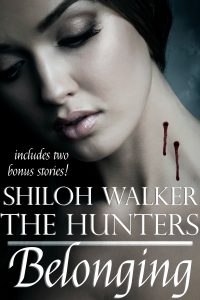 Being a vampire can suck. Corinne Lewis will be the first to testify to that. She went through the “change” but it certainly didn’t change her all that much.

Still shy, quiet and a wallflower, she doesn’t fit in with the rest of the vampires or other paranormal creatures at Excelsior, the school that trains the elite Hunters. She lives there now, working for the people who took her in after the vampire attack that changed her and left her too afraid to cope with undead life—and everything else.

Of course…there are some changes, and they are awkward. She was never really liked sex, always thought she might be frigid, but now she needs it. A lot. One night, unable to go to the men at Excelsior, she goes in search of a one-night stand and finds herself facing a blast from the past.

But once he discovers who she is, can he forgive her?

And can she let him go?

“Do you remember that last Christmas? Before you broke things off with Owen.”

Was it just him or did she suddenly look a little paler? A little more nervous? Slowly, she nodded. “You were wearing this gold dress and kept toying with your necklace. And you had the saddest look on your face.”

She wasn’t looking at him now. She was staring at the floor again, concentrating on it, just so she wouldn’t have to look at him.

Fine by him. Levi really didn’t need to see her face as he humiliated himself. “I didn’t like seeing you look that miserable. All I wanted to do was make you smile a little. Maybe make you laugh. You always laughed when I teased you, even while you blushed and tried to hide it. That was the only thing I wanted to do. But then I kissed you, and you moved…everything changed for me that day. Everything. But it didn’t change for anybody else. Just me. You were still Owen’s lady, and you never really talked to me unless I started a conversation. You never looked at me unless you had to. I was nonexistent. The day you broke things off with Owen, I felt like a fucking asshole because all I could think about was the fact that since you didn’t belong to Owen anymore, I might have a chance. Then that night…”

He paused and took a deep breath. She still wasn’t looking at him. His heart clenched painfully and he turned away. “That night, I didn’t want to let you leave. I wanted you. But it didn’t feel right. I spent the past four years of my life hating myself over that. If I’d done what I wanted, maybe none of this would have happened.”

He shook his head. “I didn’t recognize you either, at least not all the way. But something inside me knew. You were the first person, in four damn years, to make me feel much of anything besides grief and guilt.” He snorted. “But all you needed was a dick. Hope it helped, Cori.”

He reached for the doorknob.

But before he could open it, Cori was just there. So fast—almost like magic. Poof. She had her back pressed to the door and when he tried to tug it open, she leaned back harder. Levi narrowed his eyes. “I’m done here, Cori.”

“I’m not.” She gazed at him, something he couldn’t quite define shining in her eyes. She caught her lower lip between her teeth, a familiar nervous gesture, one he’d seen a hundred times before. “Do you remember that day at the river, when you asked, why then? Why was it I suddenly knew I had to call things off with Owen?”

Instead of answering, he crossed his arms over his chest. It kept him from doing something stupid, something that would humiliate him. Like grabbing her. Or going down on his knees and begging…for what? He didn’t even know.