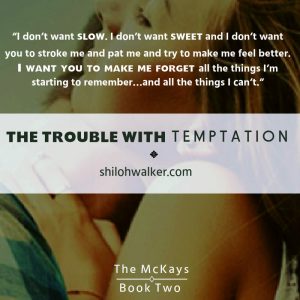 Hannah had a pale, bruised look to her.

Brannon wanted to find whatever had hurt her and tear it apart.

She stood in the doorway, staring at him and he reached up, cupped her face in his hands.

Slowly, he brushed his thumb across her lower lip.

A slow shudder wracked her body.

Clouds entered her eyes. “Nothing,” she said, shaking her head. “I’m just…”

She backed up and turned. “Come on in, Brannon.”

Outside, the wind started to howl and she moved over to the window, staring outside. “Rain’s coming.”

After closing and locking the door behind him, he crossed the floor to her.

He had the oddest feeling he was walking on eggshells.

“Unless you’re upset over the weather report, then I don’t care.” He curved his hands over her shoulders and pulled her back against him. “Now if you are upset by the weather… well, I can’t do anything about it. I can’t beat up the meteorologists and Mother Nature never returns my calls.”

“She’s a bitch, isn’t she?” Hannah laughed weakly. Then she dropped her head back against his chest. “Don’t…it’s nothing, Brannon.”

He rubbed his cheek against hers. “That look on your face isn’t nothing.”

“Maybe. But there’s nothing you can do about it.” She turned and slid her arms around his waist. “How is Marc doing?”

He wanted to push it, but figured now wasn’t the time. “Okay. I guess.” Tucking her up snug against him, he rubbed his cheek against her hair. “He’s busying himself with some blends for next year and going crazy about a fungus that he thinks could hit our crops.”

“A fungus.” Hannah wrinkled her nose as she looked up at him. “What, like a grape fungus?”

Brannon flashed her a grin. “The exciting life of a vintner, Hannah.”

“Hmmm. I bet.” She reached up, almost absently, and scraped her fingers against his jaw. “Neve was telling me something about how she’s getting schooled in winemaking—you roped her into helping write copy for the brochures.” A faint grin came and went. “I’ve got to admit, I like my wine, but my eyes glazed over after she started explaining there are like five hundred chemical compounds—”

Hannah blinked and then her eyes really started to glaze. “Ah…whoa. Are you serious?”

“Yeah.” Grinning, he hugged her. “But don’t worry. I won’t bore you with the details and specifics, or tell you why you only find wines like muscadines down south.”

“Gee. Thanks.” She rubbed the mound of her belly and went back to staring outside. Rain was starting to come down. It was those hard, slow drops that were a prelude to a heavy storm. “I really don’t want to talk about muscadine wine anyway. Seeing as how I can’t have any for a few more months.”

A heavy sigh escaped her. “I could really use a glass of wine, too.”

“Why don’t you talk to me instead?”

For a moment, he thought she would.

But then she turned to him and placed her hands on his chest.

His heart made a hard leap when she covered it with her palm. “I’ve got a better idea. Why don’t you distract me?”

But then she trailed that hand down lower and cupped him through his jeans.

His eyes started to roll back in his head as she freed him from his jeans and briefs in short order. She closed her hand around him, moving with quick, rough strokes that would have had him coming all over her if she wasn’t careful.

He caught her wrist.

“Stop,” he rasped, backing her up against the window.

“Hannah…” His heart broke a little.

“Make love to me, Brannon.” There was both plea and demand in her voice.

He was completely her slave, because he couldn’t deny her.

“I will.” He went to strip her shirt away, but she shoved him back and yanked it off.

She caught the lapels of his shirt and jerked him back to her.

“Then what do you want?”

That’s where the hurt was. Right there. But he couldn’t fix it. All he could do was be there…and this. He could do exactly what she’d just asked and he’d enjoy it. He’d enjoy it and pretend the twist and rub of guilt didn’t exist. He could ignore the guilt.