Winners have been drawn and posted in comments.  No new winners taken at this time! Thank you!

Her Wildest Dreams, one of my oldest ~ and most popular titles ~ is about to be reissued.  If anybody would be interested in reading/reviewing it, it will be up on netgalley in the next few days.

Also, I’m give away some epub copies here via the blog.  How many depends on how much feedback I get.  If I get a couple of comments…well, I won’t give away a bunch.  If I get a LOT of feedback, I’ll giveaway more.  🙂  So odds of winning depend on number of participants.

Reviews aren’t necessary, but they are very, very much appreciated and help in ways you don’t imagine…word of mouth, etc can make or break a book, which is why that kind of feedback is so crucial.

The revised blurb and a snippet are below.

FYI, if you’ve read the book before, it’s been very heavily edited and VERY HEAVILY REWRITTEN…thus the new title.

Also…because I’ve been asked…no, I’m afraid if you’ve purchased the old copy, I can’t give you a new one for free.  The books are distributed via different platforms, etc…but I kept the price low.  It’s only $2.99 up until release date and it’s a much better, much tighter book…with new material added. 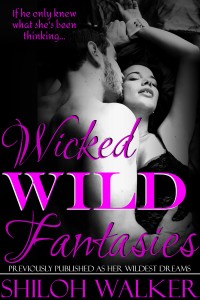 Alison whimpered as Alex cupped her face in his hands. He kissed her and licked a hot, wet path across her mouth.

Alex sighed, the sound faintly amused. He pressed his thumb to her lower lip while his free hand smoothed down her bare back. Bare…

How had she gotten naked?

And she was on his lap—

She swallowed and whispered against his thumb, “I’m sorry, Alex.”

She didn’t remember how they ended up on the bed. One moment she’d been on his lap, naked. Then she was on the bed, the mattress like a cloud under her while her arms were stretched overhead. Not just stretched, though. Cuffed. She was bound and bare beneath him and Alex stood between her legs, using one foot to nudge her thighs apart. “Spread them,” he said, giving her a cocky grin as he echoed one of the most clichéd cop lines ever.

“Are you…are you arresting me, detective?” she asked.

“Should I?” He went to his knees now, staring at her with hot, hungry eyes. “Have you been bad, Ali-cat?”

She shook her head. “No.” She was never bad. And that kind of sucked.

Still fully clothed, he laid a hand on her bare thigh and said, “I bet you have been.” Then he smoothed his hand up, not stopping until he met the juncture where hip met thigh. Then he brushed his knuckles across the damp curls that covered her. “See…bad girl. You’re already wet. Why are you so wet, Ali-cat?”

Then she jolted as he brought his hand down on her. She arched up, staring at him in shock. He’d just…

“I spanked your wet little cunt, Ali-cat. Did you like it?”

“Why are you wet?” he asked again.

“Because…I…” She moaned and rolled her hips. “Because I want you, Alex.” Always. She’d always wanted him.

“Want me to do what?” He continued to watch her. He could have been bored for all the interest he displayed. But there was a hot, wicked glitter in his eyes.

“Not good enough.” He shook his head even as he passed the front of his hand down his crotch. “Tell me you want me to fuck you, Alison. Tell me.”

“Fuck me,” she pleaded, staring up into his dark-chocolate eyes.

He came down over her and she gasped at the feel of his cock, hot and thick, nudging against her.

He drove the rigid length of his cock inside her. And held still. “Beg me,” he whispered, nipping at her ear.

Alison awoke with a moan when Alex trailed his lips down the curve of her neck. Somehow they had gone from sleeping sitting upright on the couch to sprawling on the floor, with his hands inside her panties, cupping her ass while he nuzzled and nipped along the line of her neck and shoulders.

Dazed, she tried to blink her mind clear, but the dream clung to her. It clung and mixed, mingled with a million daydreams…and a bit of reality.

What would he say if he knew?

Sweet, innocent little Alison Ryan had seen him having sex.

A few years ago, his house had flooded and he’d needed a place to stay. Mike had been out of town and this place had always been open to Alex. Too bad nobody had told Alison.

He caught her nipple in his teeth and she cried out, even as her memory fed her another image from that day.

She’d come in through the back. Her house was just a block away, on the other side of the flood wall and she’d made some chocolate chip cookies for Alex. The door hadn’t been locked.

The woman—Alison had no idea who she was—had been cuffed to the four-poster bed in the guestroom. The door had been open, the shadows from twilight lying heavy on the house.

“Tell me what you want,” Alex had said.

The woman had moaned as Alex trailed his hand down her torso.

He’d squeezed her nipples and smiled. Alison had only seen his profile, but that smile, both beautiful and cruel, had made her pussy clutch and ache. “I’m right here.”

So he’d pushed his thumb inside her mouth. “Like that?”

Just then, Alex swept his thumb over her lower lip and instinctively Alison opened her mouth and sucked it inside. She’d relived those stolen few minutes a hundred times, maybe a thousand.

When he pushed his thigh between her knees, she moaned and rocked up. His teeth toyed and tugged at her nipple, but he made an irritated noise and shifted away, long enough to tear open her shirt.

Alison cried out at the feel of his mouth, hot and wicked, on her bare nipple. He used his tongue to push it to the roof of his mouth and sucked on it, drawing hard and fast, showing no mercy.

She shot her hands into his hair and tugged, holding him tight.

He allowed it for a moment and she hissed out a breath as he tore at her panties, then they were gone…just gone…and she felt a blistering, deadly sort of heat spiral through her as he caught her hands and pinned them over her head.

Her mind flashed back to the dream.

Was she even awake?

Rough denim scraped against her thighs. His palm was hard, broad, calloused as it skimmed down over her belly and then she gasped, her eyes flying wide as he used two fingers to open her, parting the lips of her sex and then plunging them deep.

A soundless scream escaped her and then, before she could catch her breath, Alex’s mouth crushed hers, his tongue driving past her lips. It swirled and tangled with hers as he rubbed his fingers inside her pussy, stroked, teased…

And then he stopped.

She mewled out a protest, tried to reach for him, but he muttered against her mouth, “Be still… just…”

His voice faded away and in the silence, she heard a load, rasping noise. His zipper.

His cock sprang free and for one moment, she felt him pulse against her thigh and in that brief moment, her head cleared.

His dropped his weight down on her and she blinked, staring up at him.

His dark eyes were open, but…not.

He kissed her again and lost, she kissed him back.

He came inside her, hard and deep and fast. And Alison, unprepared, untried, screamed in shock, in pain…and in pleasure.

So… want a copy?  Just tell me… did you read the old version?  Yes or no.  🙂  I’ll draw some names to get a download of the updated epub.  Disclaimer, etc, etc… here