Thirty Nights with A Dirty Boy

This is my version of a billionaire story.  Only she’s the billionaire and he’s…well, he’s a dirty boy.

Ella has issues.  Ella has a lot of issues.  But she’s also got needs and she’s tired of being lonely.  She decides she’s going to do something desperate…hire a man.  Specifically, a male prostitute.  Big, blonde and beautiful, Sean speaks with a sexy Scottish accent and just looking at him turns her belly into knots.  Just looking at him makes her want the kind of things she didn’t think she would ever want.

She’ll hire Sean and store up a lifetime worth of memories.  At least, that’s the plan.  But things never go according to plan, do they? 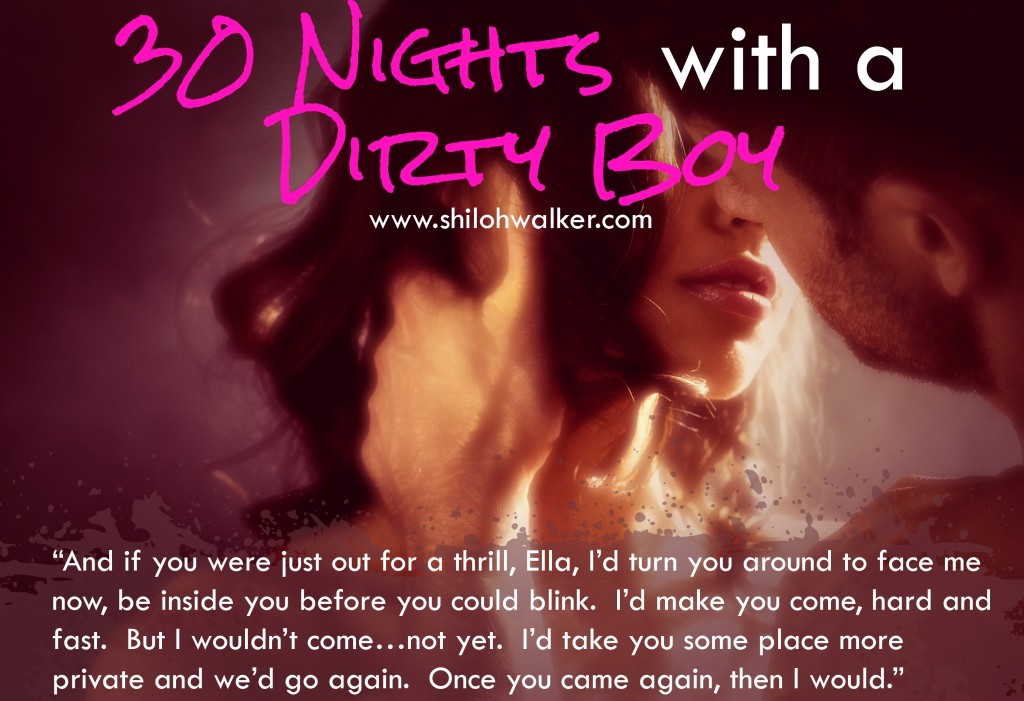 3o Nights will be a three part serial, a story I’ve sold to Heroes & Heartbreakers. HeroesandHeartbreakers.com members will be the very first to read the stories on the site later this year, an exclusive perk for H&H readers, so be sure to join the community now so that you don’t miss a thing! All three stories will also be available for purchase as e-books in early 2016 for those who want their own keeper copies.  And yes…these books will be available to read on the site for free!

Sean wore nothing but the tight t-shirt, one that displayed his tattoo in all its lovely perfection.

When I shivered again for the third time, he caught my hand and tugged me into the alcove formed by the doors of a closed shop.

He braced one hand on the wall over my head and the other on my hip.

“You realize this involves me touching you, don’t you?”

I jerked my head in a nod.

He saw too much.  I suspected he could see the things I didn’t want him to see, but it wasn’t like some of those secrets were hard to figure out.  I flinch when I’m touched, I flinch when people get too close.  And I’m paying a man to have sex with me.

I blanched at his question.  Was he a mindreader too?

He slid his hand up, the heel barely grazing the outer curve of my breast, but it was a touch I’d never experienced before so I felt it—felt it in ways I couldn’t describe.  He noticed—I saw the way his pupils flared—but he made no sign that he’d noticed.  He just kept on his mission and that was to curve his hand over the back of my neck.  He leaned in and this time, when he whispered into my ear, it wasn’t such a surprise.  He’d been this close before and I’d handled it.

“Why pay for sex, Ella?  You’re a pretty woman.  If I had seen you someplace other than where I work, I might have asked you out.  You can find a man who’d be happy to take you to his bed and you wouldn’t have to pay him for it.”

His voice was a soft, seductive caress.  It would have been easy to just fall into it and not think about his words.

But I suspected he’d have an answer before he consented.

“Women come to me for a number of reasons, sweet lady.  I could just take their money and give them what they ask for…but I want them to know what they are getting in return.  I promise sex, nothing more.  Nothing less.  Plenty of them think they’ll get something more—and for some of them, that is fine.  Some just want the thrill…”  He turned his head and I gasped when he bit my earlobe.

A hot, delicious bolt of pleasure ripped through me.  I hadn’t felt the likes of it…ever.

“And if you were just out for a thrill, Ella, I’d turn you around to face me and be inside you before you could blink.  I’d make you come, hard and fast.  But I wouldn’t.  Then I’d take you someplace more private and we’d go again.  Once you came again, then I would.”

I had to squeeze my knees together now, because I was aching inside.  Aching deep down, my clitoris pulsing.  All because of the words he spoke.

“But you don’t want a thrill.”  He smoothed his hand down the front of my torso, left it there.  Whether it was to tease or to warn me, I don’t know.  “You’re terrified.  You want me, but at the same time, part of you wants to withdraw and run.  So it isn’t thrills you chase, Ella.”