Cross-posting with my J.C. blog… 🙂 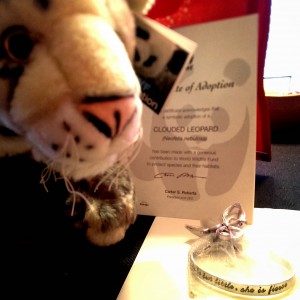 Giving away a clouded leopard (and an ‘adopted’ one)…from WWF.  Basically, the funds help to go protect animals like the big cats and their habitats.  It’s a symbolic adoption, just keep in mind. 😉  There’ also a cuff bracelet that makes me think of Kit. If you want to enter for a chance to win, join in on the blog tour.  Full list here…

Some Qs on Broken Blade, from email, FB, etc

When is the next one/is this the last one?

No, it’s the not the last one.  Book 4 has been fighting me and I wasn’t able to figure out an excerpt to put in the back because I didn’t know if it would change or not.  The title will either be Forged Blade or Edged Blade.

Why so long? You only write one book a year?

If I don’t want the quality to suffer, that’s the quickest I can put them out. I actually write several books a year ~ under my main name ~ and the majority of them are contracted works, meaning I’ve already signed contracts and they have deadlines.  As the Colbana books are still a side project, they are done when I’m able to work on them.  I don’t want to rush them and the stories suffer for it, nor am I going to neglect my family to try to put them out more often. There are only so many hours in a day that I can work.  I hope you understand.

I’d love to have these in audio!

Trust me, so would I.  But that isn’t up to me.  Self-pubbed stuff doesn’t often get picked up.

Is it coming out in print?

Yes, and it’s totally my fault it hasn’t been released already.  Sadly, my laptop starting acting up a few weeks ago and I was holding it together until the end of the year.

I did start working on getting the manuscript loaded on Createspace and left it just in a draft status of sorts.  Using the platform on Createspace requires waiting until you’re ready to release the book.  It looks like there’s another option that’s recently been made available for preorders of sorts, but it looks like a hoop-jumping experience to say the least plus I have to either connect a couple of accounts or open a new account somewhere.  It’s not simple, I can tell that much.

Anyway, my tech issues (ie: laptop really messing up and my new one being a peice of crap that I had to return) all happened the same time I was trying to get it loaded so it would be ready to release this week. Needless to say, it didn’t happen.

The good news is I have everything loaded, the proof part is done (for the most part) so it shouldn’t be long before it’s ready to order.

I’m really sorry it’s taking this long. I know it’s frustrating, but it shouldn’t be too much longer.

Are you done tormenting Kit?

FYI…I don’t mention anything specific, but I do go into some vague detail here.  Just be warned.  I’m addressing this because the Q has come at me several times.

I didn’t set out to torment Kit. I write her the way she came to me in my head…and despite what people may think, the events in Night Blade threw me for a loop as well. I’m not somebody who sits out and plots books out by the chapter and I see a rough destination, and with these, I see a rough series arc.

I knew there would be a confrontation between Kit and the bastard in book 2.  I didn’t see it happening like that.  I spent the last few chapters in tears.  I’m the narrator of these books and I’m just telling Kit’s story…as I see it playing out in my my head.

Kit is messed up, though, even aside from what happened in book 2.  She sees all of her worth in her sword.  That’s not who–or what–she is, but she wasn’t going to realize that until she was forced to.  No, that doesn’t mean I wrote book 2 so I could kick her while she was down.  Shitty things happen even in fiction.  Kit’s probably my favorite of all my characters and what I’d like is to see her happy. She’s going to get that way, but she needs to figure out all the cracks she has inside, which she finally started to see in book 3.  Until you see where the cracks are, you can’t fix them. That’s where she’s at now.

Plus, I don’t believe in insta-fix.  That doesn’t happen in real life. She went through a nightmare in book 2 and if she went tra-la-la back into life?  That would be BS.

Night Blade & Broken Blade were probably the roughest, as far as what happens to her.  At least I hope.

I’ve only read your J.C. books…I can’t wait to try your Shiloh books.

I think I covered most of the ones that I’ve gotten…I think. O.o

Thanks for all the lovely comments and the interest and the emails.  You all rock.