Hmmm.  How about one of my older ones? 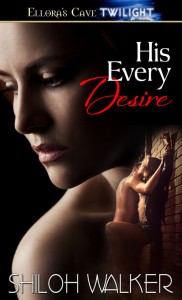 “Imagining things,” she muttered to herself as she walked through the house one more time, checking all the locks, checking the windows.

She even got her gun out. Emery hated the cold, lifeless feel of it, but she’d be damned if she didn’t feel a little better as she checked the chamber.

Passing by the hall mirror, she paused and studied her pale reflection. She looked like a ghost.

How in the hell could just seeing a car do this?

Shaking her head, she started up the stairs, leaving the lights on behind her as she went.

Moving into her room, she closed the door and started toward the bed. She needed to get some sleep. Tomorrow…

That voice…swallowing, she turned slowly, lifting the gun and leveling it at the man who had been hiding behind the door.

Joel! For one split second, she almost flung herself at him. She stopped just in time…it had been three years. Three damned years.

“What are you doing here, Joel?”

A slow smile creased his face. “Watching you. But you already know that. You saw me earlier, didn’t you?”

His dark blue eyes flashed at her as he snarled, “If he was, do you think I’d just be standing here?”

Emery swallowed and shook her head. “I don’t know. Joel, it’s been a long time…”

“Three years,” he murmured. “I’ve been trying to find you for a year now. You hid well.”

A year… “You’ve been looking for me?” she asked, her voice tight and rusty.

A slow smile spread across his face. She knew that smile. Knew it well…seconds later, he pulled her into his arms and she moaned as he slanted his mouth across hers, pushing his tongue deep inside, kissing her deeply, his tongue rubbing across hers, sweeping over the roof of her mouth, across the surface of her teeth.

Tasting her—like he had been starving for her.

Whimpering she pressed against him. Heaven knew, she had been starving for him. That worry, the gut-deep fear slowly faded away as he touched her. When he touched her…it didn’t feel as though even a minute had passed since he had last kissed her.

His hands stripped her clothes away as she rose onto her toes, burying her fingers in his hair. Cool air bit her flesh and then his hands were on her hips as he spun around. She felt the wall against her back, and then…oh, please. She whimpered as he let go of her for a second–