Anne has awesome taste.  I love the Valdemar books. 🙂  Anne, can you please email me at shilohwalker(at)gmail.com?  I’ll get you in touch with Lynn.

A fairy tale… a dirty one, though. 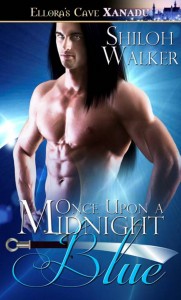 The wood was chopped.

“One last favor, I beg of you, soldier, before you go. I’ve dropped my light—it is such a special light—into that dry well, and I am far too old to fetch it. You’ve been too ill until now to get it, but before you go—”

Aric stared at her, resigned. “Your word,” he said finally. He wouldn’t have dared to ask, if he wasn’t so desperate to flee this place. But he could not possibly stand another week here. And winter was coming quickly. If he didn’t leave soon, he may not be able to leave for months. “I want your word, and your bond and your blood seal that after I am out of that well I may have my leave of you, without tricks or strings or promises.”

Her faded eyes flashed with anger before she smiled ever so sweetly. “Of course,” she cooed, sounding like a sweet old grandmother.

Aric wasn’t fooled but he went to the well and sure enough, he saw the blue light. “I do not understand why it has not yet burned out,” he said, frowning a bit.

“It is a special light, not true flame. It never truly burns out,” the old woman said. “But it works only for me. Now, hurry and fetch it, soldier. Don’t you wish to go home?”

Aric flashed the witch a tiny smile and swung his leg over the lip of the well, using the rope and weak toe holds to work his way down. The ground below was boggy, and a bit damp, but the well was basically dry. His hand hovered over the blue light, which gave a cool sort of heat, but did not burn him so he scooped it up. “How am I to carry it?” he shouted up.

A tiny golden box was flung down to him and he put the light into it—the blue light dancing within the golden walls, spinning around with a mind its own. The longer he watched it, the more it looked like a flame, and the warmer it began to feel. “Come, come, we haven’t all day, now have we?” the witch cried out.

He grabbed the rope and started to climb, but it was far more difficult to go up than down—the toe holds worn, the walls slippery and treacherous. When he neared the top, she said, “Give me my blue light.”

Narrowing his eyes at her, he said, “Not until I am on the ground.”

“Give it to me,” she snarled, reaching for him.

Aric wrapped one wrist in the rope to secure himself and easily batted her hands away, laughing. “You healed me too well, old woman. You’ll not be getting it from me until I choose to give it to you. And I’ll give it to you when I am on firm ground again,” he told her, his pale green eyes glinting with amusement, his thick black braid falling back behind him.

She hissed and spit and raged, slashing at his face with her ragged nails. All that, Aric didn’t mind. But then her hands started to glow, with an eerie green light. So he did the sensible thing and released the rope, falling to the soft, soggy ground below. And when his head cleared, the rope was retreating up the wall and he was well and truly stuck in the fucking well.

“Well, shit,” he snapped, banging his head against the wall. His gut burned and twisted with anger. At the witch, for not being honest. At the King, for lacking honor. At himself, for being a fool and trusting others. And now he was going to die down in this bloody well—cold and wet.

Reaching into his pocket, he opened the little golden box. It was almost hot to the touch and the blue light was more flame now. Wondering, he prepared the last of his shai-tobacco and checked to see if the little flame was indeed fire. It was, and produced a terrible smoke.

But, ahhh, the warm, fragrant smoke filled his mouth and lungs, and Aric leaned his head back against the stone wall, and closed his eyes and drew the smoke in again, unaware more smoke was pooling and thickening all around him, then condensing and forming into a solid being. A very solid being.