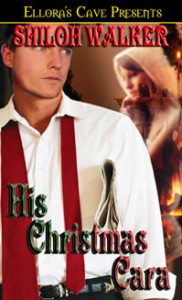 “Ah, yes,” the guide murmured, a smug, pleased little smile curving her lips as she glanced from the scene in front of them to Eben. “There’s the girl. Even more than Bella, she made you forget yourself, didn’t she? So much so, that you pushed her away.”

“Stop it,” he growled, staring at the image of himself in bed with Cara. His gut clenched, his cock jerked in remembered ecstasy as he watched himself slide his hands up the long line of her torso to cup her breasts. He could remember how she felt under his hands…soft, silken…perfect.

There had been love in her eyes, naked and shining. That girl had been an assistant in accounting, and had been promoted after just a few months to an admin assistant. For the past few months, she had been working pretty closely with him, and always staring at him with those pretty green eyes. He gave in to temptation one night—taking her to the Grand, wining and dining her—then he had fucked her silly.

The following Monday he’d had her transferred to another department, one where he wasn’t likely to see her often, if at all.

Just so he wouldn’t have to see that love again.

The final image of her was the one he had shut out of his mind, right as he’d closed the door to the suite on her, after telling her Tom would take her home. She had just sat there, staring at him, her pretty green eyes blank.

The guide whispered, “What is it about love that frightens you so, Eben?”

He went stiff as another scene from his past wavered into view, his eyes narrowing on the image of yet another woman—this one somebody he couldn’t even remember. How could he forget a woman who had taken his cock into her mouth? A woman whose thighs he had spread wide while he lapped at her pussy? How is that possible? But he had done it. Slowly, carefully, trying to keep the frustration he felt from surfacing in his voice, he said, “Love doesn’t frighten me. It’s just…useless.”

“Useless,” the spirit repeated, her voice flat and cool. “Love moves mountains, shatters lives and rebuilds them. Love is the most amazing, and sometimes, the most awful thing known to man. Only love could take a child who was raised by cruel parents and turn him into one of the kindest, giving men. Only love could teach a woman who had known only abuse at the hands of a man, to trust another man, and allow him to teach her true pleasure. Love is many things, but never useless.”

Eben turned to scowl at her, only to find himself alone. Once more.

Also!  Last day to enter Lynn Viehl’s giveaway! Winner to be posted sometime next week…must check back to claim prize.

One Reply to “Flashback Friday… His Christmas Cara”