Contest is OVER.  No comments posted after 12/7/2012 will be entered… winner posted next week… thank you!

Why? Because I CAN’T WIN THINGS ON MY OWN BLOG! Damn it! Kicks rocks.

Here we go!  Everybody say hi to Lynn!

Everybody!  Read her awesome post and enter to win her awesome prize…and ignore me. I’m over here kicking rocks. 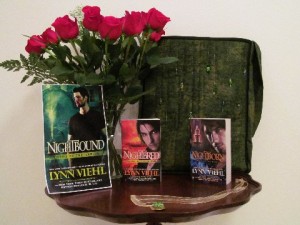 The Rule of Three

Lately my life has become a ménage à trois .  Not in the classic sense, of course; that would be a little difficult to explain to my mother:  Hi Mom, meet my guy, and my other guy.  I know it’s a little unconventional but . . . Mom, put down the baseball bat.  Instead, sets of threes have taken over my life:  I live with three wonderful people (my guy and our two kids) and three pets (two dogs and a cat.) Every day I work three jobs (author, housewife and teacher) and devote my spare time to three hobbies (quilting, painting and journaling.)  Last week I even grew two extra heads.  No, honestly, I didn’t, but I bet you’re paying attention now, right?

Despite all the naturally-occurring, non-gruesome, G-rated threesomes in my life I’m still learning how the rule of three works.  Did you know there is an actual rule involved?  As it happens using threes is a sure-fire way to make things like storytelling, humor and ideas more effective, as three is the smallest number of things that make up a pattern.  Because it’s the smallest, it’s also the easiest for us to follow, understand and remember.  For example, we can name the Three Stooges (Larry, Curly and Mo) much faster than Snow White’s Seven Dwarves (Sleepy, Dopey, Angry, Smiley, Shorty . . . and those other two little guys.)

Writers rely on the rule of three when we structure classic story arcs (aka the introduction, the complication, and the resolution) and comedians tell jokes with the comic triple (the set-up, the expectation, and the punch line.)  Back in 1971 our teachers even used the rule of three while making us memorize a new street safety code — Stop, Look and Listen — that reduced road casualties across the nation 11% that year and has been saving young lives ever since.

From there I wrote what would become an eight-novel romantic suspense series, a ten-novel SF series, and then a twelve-novel dark fantasy series, all of which I enjoyed but over time seemed to be stretching out into never-ending stories.  As a reader I enjoy long series, but these days there are so many being published that it’s tough to keep track of which book is what without a cheat sheet.  That’s why I decided to take a break from writing long series and go back to my story-writing roots with the Lords of the Darkyn trilogy.

Writing a three-book series is not easier than a lengthier project; in some ways it’s more demanding.  Having ten or more books to spend in one universe doesn’t impose a lot of limits, but a trilogy demands you get everything done no later than book three.  For me this meant I had to stop falling in love with my secondary characters, most of whom always want their own books. Keeping control of my subplots and connecting threads between the books was also imperative.  It’s a bit like taking a three-day weekend holiday versus spending a month or two on vacation; you can’t bring a lot of baggage, you don’t put off anything important and dawdling by the pool for days to flirt with the cabana boy is simply not an option.

Along with the challenges writing a trilogy offers some decent benefits.  Keeping track of your characters and their storylines doesn’t require updating a complicated, gigantic series encyclopedia; you can usually fit all your story stuff in a few binders.  Readers don’t have to wait years for you to finish a series story, while you don’t have to worry as much about a publisher ending your series before you’ve written the final book.  Trilogies tend to attract more new readers, too, because they don’t have to read five or ten books to catch up if they discover the author in mid-series, because book two is mid-series.

To celebrate the holidays and the release of Nightbred, which is the mid-series novel in my Lords of the Darkyn trilogy, I have for one winner signed copies of all three novels (Nightborn and Nightbred in paperback plus a manuscript copy of Nightbound, which will make the winner the very first person besides me and my editor to read it), all packed in my hand quilted and beaded Emerald Dreams tote. If you’d like a chance to win, in comments name a trilogy or short novel series you’ve enjoyed reading by 12/7/2012… (ETA by Shiloh…I’ll draw a winner and post it here by 12/14…you must check back to see if you won, folks...)  This giveaway is international, too, so everyone on the planet is welcome to join in.