Okay, so this happened a week or two ago. It’s lousy and it sucks and the bloggers who actually spoke out are getting hate mail, and they are getting bullied. 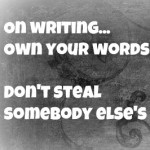 The really beautiful thing is that it was a YA blogger who was the plagiagist.  A very prominent one.  I’ll be honest.  A YA blogger is going to have lots of YA…lots of teens flocking to her blog.  I’d hold a YA blogger to a higher standard.  I’ve got a teen in my house and anybody who might have my teen in her audience?  I’d rather you not be a thief and a liar.

Yes…I discussed it with my teen and this blogger was kinda marked off the list of sites my kid will visit.  Kid was rather disgusted with the blogger.  But she’s also a budding writer, the child of a writer…she knows the value of words, and she understands the work that goes into them.

I also hope the blogger never really spoke out against bullying…if she did?  The message didn’t take, because many of her loyal followers are attacking those who spoke out against.  That’s another really disgusting part.  It’s more blame the victim stuff.

I spoke my mind about this over at the Smart Bitches blog and I think I said everything i wanted to say there, so I’ll just paste my comment here…

I’ve had my words stolen and it sucks.

If you haven’t been there, then you don’t have much ground to stand on when you’re pulling the… UR A BITCH and UR JEALOUS and SHE’S IS AWESOME AND AUTHORS LOOK UP TO HER… (FYI, I’m an author and I don’t.) She’s also a blogger who is forever off the list of blogs my kid will be allowed to visit.

It’s that old… WALK A MILE IN THEIR SHOES. If you can’t do that, all you’re throwing around is empty words. You’re also setting yourself up for karma in the worst way, because everything comes back on you. If you treat people fair, you tend to get fair treatment. If you ride them down, you get ridden down. And…well, in the case of the Story Siren…she treated people like waste when she stole from them. This is the consequence. When you lash out in her defense and get ugly over it, you’re setting yourself for future consequence yourself.

Think of something you worked really, really hard on. Something you put a lot of time into… whatever it may be. Maybe it was a school assignment. Maybe it was some sort of artistic creation. I don’t know… but you worked HARD, and you accomplished something and you ARE PROUD OF IT. Hell, maybe it’s a relationship. You’ve got a great boyfriend and you two are wonderfully happy and it’s awesome.

And then somebody comes in and claims that work as their own. Or some tramp comes in and steals your boyfriend, or at least makes a play for him that just leaves you feeling sucker-punched.

They don’t credit you. They don’t thank you. They take your hard work, claim it as their own and just walk on. It’s a betrayal.

And the bottom line, if you can’t see that… it means you’ve never invested that much of yourself in something. Which really… well, it’s kinda sad.

To all the bloggers who stand up against this, you have my appreciation.

Now… I dunno if it will happen, but if by chance any of those defenders show up here…I have a policy against those who can’t keep a civil tongue…or tone.  Want to argue with me?  Fine.  But do it with a civil tone…my blog is for my readers and they don’t need to read nastiness.  You can argue without spewing hatred.  I do it all the time.  Get ugly or nasty and the posts do get deleted… or at least modified.  That’s the blog policy and it’s been made clear up front.

Want to email me hate mail?  That’s cool, too.  The contact button is right up there at the top, but don’t expect a response.  I don’t waste my time with UR A BITCH or UR JUST JEALOUS.

I don’t have a reason to be jealous of a plagiarist and I already tell people I’m a bitch, so there’s not much to respond to there, anyway.