I’ve gotten these questions a lot lately, so rather than just trying to parse it out in twitter or facebook or keep answering it on twitter, I’m just going to do it here…and then link here… I’m lazy… and swamped. 😉

These questions often go hand in hand, so I’ll answer them that way.

How long have you been a writer…

Always.  Seriously.  I think I came out of my mother’s womb telling stories.  I’m just a storyteller.  I started actually writing them down in middle school, as far as I can remember, although my mom says it was before that.

I wrote short stories all throughout middle school and got into longer stuff in high school.  I had notebook upon notebook crammed with stories written in horrid purple ink… (yeah, what was I thinking).  Many of them were fantasy, although there was one contemporary young adult that had the hero dying at the end.  Yes, even in high school, I was all about the angst.  In nursing school, there was the start of what might have been a halfway promising romantic suspense, and if I can ever find that one, I might try to rework it and do it again.

Now… when did I start writing professionally?

I sold my first book in late 2002.  By then, I’d written dozens of stories, if not more.  I’d had dozens of rejections. I kept working in nursing even after I’d sold and even though I was able to quit my day job in 2004, I keep my license active because writing isn’t a stable field.

I’m not exaggerating on this and I’m not trying to scare anybody, but just because you’ve sold ten, twenty, thirty, sixty books doesn’t mean you’ll be able to keep on selling. Trust me on this…I speak from experience.  There are no guarantees in life, and especially not in writing, except for this.  It’s hard and signing a contract doesn’t mean it gets easier.

Sooooo…if I haven’t managed to completely scare you…

The next question that generally comes…

How do I become an author?

The answer to this depends…Are you a new writer?  If so…

Have you been writing for a while but don’t know how to go about getting published?

Ok.  See?  This is why this is too complicated to go into via twitter, really even via FB.  You can do it an email, but doing it repeatedly… ah. The brain.  It hurts.  So now it’s immortalized on muh blog.
One thing to keep in mind, above all of this… there is no set path to becoming an author. We all get where we are differently and it’s always a learning journey. It’s a rocky road and it can be fun, but what worked for me isn’t going to work for others. Just like their journey wouldn’t have worked for me. This is one of those things where you kind of have to find your own way.
Hope it helps. 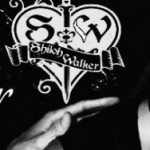