I’m working on the edits for the UK version of IF YOU SEE HER…this mostly just included making sure the formatting is okay, but it must be done.

I still love this scene.  🙂 (FYI, if you haven’t read these books, there is no spoiler here, but please keep in mind, don’t try to read the Ash (link) books out of order…start with IF YOU HEAR HER) 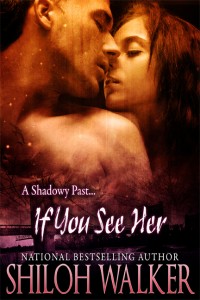 “Is that a polite way of telling me to leave?” Remy said, lifting a golden brow.

Hope swallowed, then bit her lip. “Actually, it wasn’t much of an attempt to be polite—I’ve got some things to do and I’m sure you have better things to do than stand around in here with me.”

“Actually…” he looked down at the glass of tea he held in his hand, stared at it as though he found it fascinating. “Now that you mention it, you’re kind of the reason I came out here.”

Her heart started racing, but this time it was fear. Oh, God.

He’d said she wasn’t going to be arrested, and for some reason, she did believe him. But that didn’t mean he wanted somebody like her hanging around his town.

She had already caused all sorts of trouble or at least, it seemed like it had followed her. Despite the fact that she’d only been in town a few weeks, she already knew the kind of influence the Jennings family had around here. Was he here because…

Screw that, she thought, turning away from him once more. She poured her own tea and took a sip, slowly, deliberately. You haven’t done anything wrong. This is Law’s home—as long as he says you’re welcome, you don’t have to go anywhere.

Shooting Remy a narrow look over her shoulder, she bit off, “I’m standing right here. Where else would I be?”

Turning around, she lifted her glass to her lips, took another drink of the tea. Her throat was still dry, burning tight, and her heart raced. But she was mad, and getting madder. Fed up, she realized.

It had taken her almost fifteen years to find her stopping point, but damn it, she was sick and tired of being pushed around and if this slick lawyer thought he had any right…

“Why do you suddenly look so pissed off?” Remy asked.

“Why?” Hope asked slowly. She sat the glass down and then folded her arms over her chest, staring at him. “Well, let me see. First I get arrested for something I didn’t do. I get attacked. Nobody believed me when I said I didn’t hurt Law, except Law, of course. Well, Law and a few other people. But that’s beside the point. I didn’t do a damn thing. And now you’re out here harassing me. I didn’t do a damn thing wrong and if you think you can make me leave your precious little town, you can shove it.”

Remy blinked. Then he passed a hand over his face and muttered something too low for her to hear. Finally, he looked back at her and said, “Okay, exactly what have I done that you consider harassment, Hope? And when in the hell did I say anything about you leaving?”

“Well, why else would you be here?” she demanded defensively. Spine rigid, she shoved off the counter and just barely resisted the urge to back away as he took a step toward her. “It’s not like you and Law are best buds or something. Are you?”

“No.” He snorted. “Up until the past few weeks, I could hardly stand him, if you want the honest truth.”

“Well, then.” Hope sniffed. That just proved he was too much an idiot to waste time on anyway. “See? You’re not hanging out here to shoot the breeze with him, so the only other reason you’d be here would be me.”

Remy blew out a slow breath. “I’m following that part of your logic, but I still fail to see why you automatically assume I’m here because I’m trying to run you out of town.”

“What else would it be?” She hunched her shoulders. “Unless you lied about not wanting me arrested. It’s the only thing that makes sense.”

Remy closed his eyes and tried to figure out if he had ever heard a more convoluted line of thinking.

He was pretty sure he had—after all, he was a lawyer, he’d heard some seriously inventive arguments.

But this…Opening his eyes, he studied her heartshaped face. Without all that hair, she didn’t look so fragile, he realized. Not that she really was, he was coming to realize. A fragile woman would have broken after what had been done to her. No matter what people thought, Hope hadn’t broken. She had been forced to bend, to take unimaginable shit and heartbreak.

“I’m not here because I’m trying to run you out of town,” he finally said, when he thought he might be able to say it in a somewhat level voice.

Then he closed the two feet between them. He wanted to touch her…fuck it, he wanted it so bad, he hurt with it, ached with it, would have gone to his knees and begged if he thought it would have done any good.