So, you may or may not know that I’m wrapping up the Hunters series.  Sticky post…read below for newer posts. (contest)

I guess it’s a good enough point to do it. 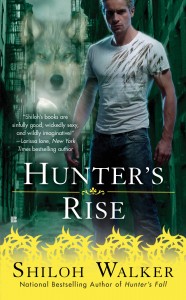 There are other books I wanted to write in that world, but…well.  We don’t get everything we want in life, especially when sales are sliding off and it’s a crazy-tight market anyway. Le sigh.

Here’s a good long peek at the book…and a chance to enter for a goody bag giveaway at the end.

It was frustrating as hell, he decided, to have a woman only a couple of dozen yards away, sitting in a hot tub full of water, a woman he wanted like he wanted to breathe, and knowing she’d laugh at him if he tried to go to her.

Shit. She’d given him the back-off and he had to respect that. Until he could get her to change her mind.

About the grabby hands thing, the seducing her thing, because damn it, if he didn’t have a taste of her, he’d lose his mind.

“You already have,” he muttered.

Determined to distract himself, he grabbed the phone and put in a call to Rafe while he went about making himself something to eat  If he couldn’t stae one hunger, he’d sate the other. A quick rundown about what had happened and he threw the name Kit in there.

“The only Kit I’m familiar with is a werewolf inChicago—married to the Master there.”

“No. It’s a male—he’s involved in this somehow.”

That managed to take up a whopping three minutes. Scowling, he stabbed at his steak as he flipped it over the grill. It was still rare when he was finished with it and that was how he wanted it. If he hadn’t had Sylvia here, he would have gone hunting for his meal—he ached for it, but he didn’t think it would do his seduction efforts any good if he went and ran down a deer and then tried to seduce her.

Not that she would be very surprised. She was a damned vampire.

But he was going to play the gentleman, eat his damned steak and then pretend to be a nice host—

Shit. This was going to try his control like nothing had done in years. Grumbling under his breath, he dumped the steak on a plate and cut into it, eating at the counter and trying to figure out the best way to handle Ms. Sylvia James. So far, they were working together okay. Right?

Two nights in and they hadn’t tried to kill each other. She hadn’t tried to strangle him or anything. That was practically a record. Sadly, he brought out the worst in people and had been known to provoke them after only a few hours. Usually on purpose, so he could be on his own once more. He liked working with her, though.

And they were slowly finding out information. The problem was they weren’t finding it out fast and while he knew it worked that way, he could see the echoes of demons in her eyes. Something was pushing her hard on this case and he didn’t know what.

Every now and then, he caught a glimpse of something in her eyes—something dark and achingly sad. Like earlier. It wasn’t just sympathy for Pulaski’s victims, although God knew, that would be enough.

There wasn’t a level in hell hot enough for monsters like that one.  Of course,Torontohad no problem trying to think up perfectly painful, brutal deaths, even knowing they wouldn’t be bad enough.

But first they had to find him and figure out what he’d done with his victims.

Hearing a footstep, he looked up as he popped the last bite of the steak into his mouth. And he almost choked when he saw her standing there. Dumping the plate on the counter, he grabbed a glass of water he’d poured earlier and gulped it down like he was dying of thirst.

She was wearing one of his shirts.

Fuck, what was it about a woman in a man’s shirt, anyway? How could they look so good in a stupid T-shirt?

“Hey.” She leaned against the wall, a sly little smile on her lips, her hair hanging in damp, clinging ropes around her shoulders and back. “I guess I should have asked you, but I needed a shirt. I don’t usually pack pajamas.”

Pushing off the wall, she shrugged a shoulder and said, “Can’t really wander around here naked, right?”

Naked. She couldn’t wander around here naked? Skimming his eyes over her lush curves, the sleek muscles, he met her eyes. “If I say I want the shirt back, does that mean you’ll wander around naked? If so, I’m very tempted to tell you that you can’t have the shirt.”

The smile on her mouth widened. “Can I get some water?”

“Sure.” Water. He needed to get her water. And then he needed to get his hands busy. Otherwise he was going to think about trying to touch her, even though she’d told him to back off. He had to go about this differently. Had to actually work at the seduction thing, and he’d probably have to work overtime since she was determined that he wouldn’t be seducing her. As he grabbed a glass, he noticed that his fingers were shaking.

This woman had him shaking.

This is bad. He had to get a grip.

After getting her some water from the fridge, he turned around and held it out. Was it his imagination or was there a devilish glint in those liquid, dark eyes? Her fingers brushed his as she accepted the glass and that slight touch sent a burning jolt through him.

Hell. He needed to get some distance between them and try to wrestle his body back under control.

Try. Turning around, he gripped the marble counter with one hand and tried to yank his body back under the chokehold of control, the one he had to use on nights of the full moon when he couldn’t shift—that iron control that he could command, when he needed it.

But he was failing.

Hell. He needed to get out of here. Out of here, away from her . . . clear his head. He’d shift and go for a run. A good hard run would help. It always did. Taking the edge off was the best thing for him. Actually, that needed to be the first thing he did—

Mind made up, he forced himself to let go of the counter so he could gather up the dishes from his meal. Still not looking in Sylvia’s direction, he rinsed the few dishes off and put them in the dishwasher. He had somebody come out once a month and clean for him, but that didn’t include doing the dishes.

Cleaning up after himself was a necessity, even if he was suddenly in a mad hurry to get out of there. Werewolves, like other shifters, like the vamps, tended to be pretty fastidious. It was a side effect of having overly sensitive noses.

“Can you go ahead and feed? I need to go for a run and I won’t be back before the sun rises.” He kept his eyes focused on the mundane chore of straightening up, although it really didn’t require that much attention. If he was looking at his hands, he wasn’t going to be looking at her, though, and he needed to avoid looking at her. Especially since she needed to feed . . . fuck.

There was a whisper—a familiar one—of cotton against flesh.

Turning his head slightly, he watched something black and soft fall to the floor.

His heart jumped into his throat, lodged there for about five seconds and made it impossible to breathe. Then it settled back in his chest, beating about two hundred beats a minute, he figured as he shut the dishwasher, still staring at the puddle of black cotton on the floor in front of him.

His palms were sweating as he lifted his head and stared at Sylvia, standing eighteen inches away, wearing nothing more than her damp hair and that devilish, cocky little smile.

She closed the distance between them and reached out, trailed her fingers along the front of his shirt. “You still want to go for a run,Toronto?”

So instead, he gathered that dark, silky hair in one hand and slanted his mouth over hers. As she met his kiss, he wrapped his free arm around her waist and hauled her against him. Naked, her skin still warm from the bath, she fit him perfectly, those amazing curves aligning next to his body like she’d been made for him.

“I thought you said no grabby hands,” he muttered against her mouth.

“I wasn’t being completely honest . . . I planned to do plenty of grabbing. I just wanted to do it my way.” She pulled back a fraction, staring into his eyes, clear challenge written on her face. “Is that a problem?”

UTA: And here’s where that… (I reserve the right to modify/change/end contests) thing comes in handy.  I ended up sick.  Really sick and I can’t keep up with maintaining the long, drawn-out contest that I was planning, so instead of that, we’ll just make this a nice, long, drawn-out contest thread that will run until 4/10… comment to enter, and one person will be drawn for the goody-bag giveaway.

Check the disclaimer-please.  I lose more contest winners this way because people don’t realize they have to check back to see if they’ve won. I don’t contact you.  You have to check back and an easy way to watch that is to sign up for the blogger feed by clicking that nifty little fire icon up above my header.