Ok, that’s not what Amy wanted this called. Sulk.

We have a guest today.  And a prize. *G* Prepare to be amused.

And say hi to Amy Ruttan. 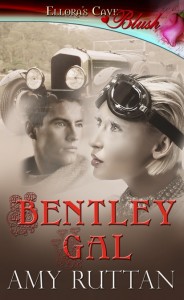 A gorilla or how brainstorming can get those creative juices flowing.

While I was writing my little 1920’s romance Bentley Gal I was twittering because hey it was my only outlet to real people since I had my youngest in 2009, anyways I was writing a scene where the hero and heroine who aren’t supposed to be together are in a boat on a river in England.

I wanted to overturn them in the water, because I’m cruel like that and I knew how I was going to accomplish this.

Sure, they’re all graceful and pretty and they have a tragically beautiful ballet named after them, but swans are mean sons of a …*ahem* you get my point.

Before my hero and heroine were overturned they were trying to find a way to deter the swans and it made me pause because firstly what scares a swan and secondly what kind of predator in 1920’s southern England who be roaming the countryside?

Hmmm. My writing came to a halt.

What is a swan scared of. Truly…not much. They’re mean birds. Their claws are venomous and will give you a nasty infection if they scratch you and the males or cobs won’t hesitate to bite you if you’re intruding on their territory. Also, in England, swan meant had been a form of delicacy since the time of Elizabeth I. So granted, swans are going to be a bit protective.

I was on Twitter, what did I have to lose?

I posed the question. What is a swan afraid of?

Only one answer came back from Shiloh Walker.

I explained it was 1920’s England and it would be hard pressed to find a gorilla. However she countered she would be afraid of an angry gorilla and I had to concur. Gorillas, especially silverbacks are insanely strong. They may look like gentle creatures and for the most part are, but if they had to defend themselves they will hurt you …badly. Hey, a swan and a gorilla given the right circumstances could be natural enemies. Right?

“It’s a—” he didn’t get to finish as the boat was whapped from the side, rocking back and forth he tumbled over the side into the cold water of the Thames. When he surfaced he saw Davina still was in the boat, but the oars had drifted away and the cob was circling, making a beeline toward him. Its honking sounded like it was coming from the depths of Hell itself. It backed off a little way letting out another god-awful honk while it flapped its wings.

“I don’t know,” Davina screeched, but he could hear the humor in her voice.

“What animals are swans afraid of?”

Davina’s eyes were wide. She shrugged her shoulders. “Gorillas?”

“Gorillas? Why would a swan be afraid of a gorilla?”

“I would be afraid of an angry gorilla,” she suggested.

“How does a gorilla act?”

“You’re loads of help.” He swam over to the boat and clung to the edge, trying to get in. The swan whacked him with its wings and jabbed him with its beak. “Dammit all to hell,” George cursed, the blow stinging his back. The cob circled again, but George made it into the boat this time. “Christ that hurt.”

Davina was hiding her laughter behind her hand. “You shouldn’t have skipped that rock so close to him yesterday.”

“Ha ha ha, very funny.” He rubbed the sore spot on his back. “I didn’t know swans held grudges.”

“I know, start flapping your arms and honk louder.”

“And what will you do, darling, laugh?”

“The swans seemed to be scared of my father’s pointers, perhaps if I imitated the dogs?”

“All right, worth a shot.” George began to flap his arms and mimicked the swan to the best of his honking abilities, while Davina barked like some kind of rabid dog behind him. It didn’t work, for the cob busked their boat, and this time the row boat rolled over on its side, depositing them both in the Thames.

I can’t recall if I intended the scene to be humorous, but thanks to Shiloh’s ribbing and the addition to a gorilla the scene became humorous and it worked for the story.

Of course, now any time I mention anything with a question Miss Smarty Pants always quips:

@shilohwalker Is there a gorilla in it?

There are plans for t-shirts if we ever end up in the same conference, right Shiloh? I’m totally game for that.

Anyways, my point is (and I swear I have one) sometimes you have to look outside the box for answers, the most unexpected tool can help you brainstorm an idea you never planned on in the first place and that suggestion could really work.

Trust me, not all brainstorms work, but heck brainstorming and trying ideas in your writing are better than hitting the proverbial brick wall and thus not writing anything further. I’ve been there before too.

Just keep writing and don’t be afraid to try something new or unexpected, you’ll never know where it will take you.

And thanks Shiloh for throwing a gorilla in the mix, so because of that I’m giving one lucky commenter an eBook copy of Bentley Gal and a mini stuffed gorilla. 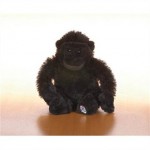 Superstar of the Brooklands racing circuit David Garr makes all the ladies swoon. Too bad he’s actually a lady too.

Davina Wentworth should be happy, she has it all—money, a gorgeous fiancé, but ever since her brother’s death the good life is not enough. Dressing as a man and racing under the name David Garr gives her the thrill she needs—until George Dyson becomes her number one rival, both on track and off.

George left the States to escape prohibition and his broken heart. He vowed never to trust a woman again, until he meets his sponsor’s fiancée who captivates him. Though he knows he shouldn’t pursue her, he can’t help himself.

Davina has only ever felt alive behind the wheel of her Bentley, until George crashes through the barriers of her heart.

Where to find me: