She couldn’t stay in the kitchen brooding about why Ezra King had never called her back.

What in the hell did it matter?

They’d had one date.

It didn’t add up to much.

So what if she’d dreamed about him quite a few times since then?

In the end, what were a few dreams? A few really, really, hot, sexy, poignant dreams? 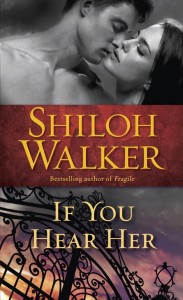 10.25.2011
A CRY IN THE WOODS
The scream Lena Riddle hears in the woods behind her house is enough to curdle her blood—she has no doubt that a woman is in real danger. Unfortunately, with no physical evidence, the local law officers in small-town Ash, Kentucky, dismiss her claim. But Lena knows what she heard—and it leaves her filled with fear and frustration.

When Ezra hears her story of an unknown woman’s screams, his instincts tell him that Lena’s life is also at risk—and his desire to protect her is as fierce as his need to possess her.  Read more…

4 Replies to “If You Hear Her…Random Snippets…”