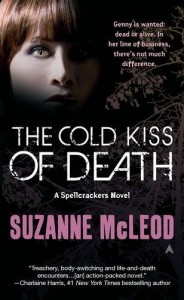 One of the myths I love about faerie stories, and use in my books, is that the world of faerie is another dimension that intersects with, and overlays our own world. And that it’s a place that can be reached if you just know which patch of clover to sit on, which alley to walk down, which tree to walk widdershins, or which door to open at the right time. I also love the idea that the faerie, and its magic, can be affected by the fae who live there to greater or lesser degrees, and like the fae, different parts of faerie can be more dangerous than others.

Extract from The Cold Kiss of Death ~ Spellcrackers #2

I slowed as I neared the RAF Monument. At the top of its granite column, the golden eagle gleamed in the grey afternoon light as it stared out across the river towards the slowly revolving Ferris-wheel of the London Eye. The waist-height gates on either side of the base were padlocked shut; behind them steps led down to a landing platform jutting into the river, then the steps turned and disappeared beneath the brownish murk of the water. It’s not an obvious entrance to someone’s home, but then, London’s fae rarely advertise their presence, nor do they welcome unlooked-for visitors, let alone inquisitive humans. So most tourists stop, read the inscription about the Air Force’s departed servicemen, cast an incurious look over the gates and then move on, none of them conscious of the subtle spell that gently urges them on their way.

I halted in front of the inscription and traced my fingers over the letters, wondering if Tavish, the kelpie I’d come to see, was home. Tavish is a techno-geek for hire – he’s rumoured to freelance for the Ministry of Defence, one of the reasons he keeps his entrance at the Whitehall steps. (Of course, the other reason his home is here is that the River Thames from Lambeth Bridge and down to the sea is his feeding ground.)

Hacking into the news services or even the police files to get me a copy of the full CCTV footage that was currently splashed across the country’s TV screens would be as easy as diving for pennies on the riverbed – something else Tavish could do with his eyes closed. And if there were any clues in the recording, deciphering them wouldn’t be much more difficult for him.

But the CCTV footage wasn’t the only reason I’d come to see Tavish.

London has three gates that join it to the Fair Lands, and Tavish is one of the gates’ guardians. If there was another sidhe in London, Tavish should know . . . even as I thought it, a shiver of awareness prickled my skin with goosebumps. He was home, and he knew I was here.

I took a guarded look round, checking no one was watching me too closely, and then clambered quickly over the gate on one side of the column. Magic clung to me as if I’d walked through a heavy mist. I jogged down the steps to the landing platform, then gripped the metal railing with one hand and crouched, peering into the water swirling a few inches below me. I could just see the top of the old archway which had been bricked up in the late eighteen hundreds, when the Victoria Embankment had been built to hold back the river. Taking a deep breath, I reached down to touch the tail of the carved stone fish statue mounted on the centre of the arch. The railing stayed hard beneath my other palm, but as the magic pressed solidly against me the traffic noise, the chill autumn wind and the ozone scent of the Thames disappeared. The world shifted around me, not as movement that could be felt, but something deeper, as if space itself was being reshaped. The magic took me out of the humans’ world.

Below me, the river was gone, replaced by an abyss so deep and dark my head spun with vertigo. Slowly I straightened, still staring down, unwilling – almost unable – to take my gaze from the chasm. There was something seductive about it; I felt as if I could launch myself into it and find what I sought . . .

I forced myself to turn, to put my back to the emptiness. Between is the gap that links the humans’ world and the Fair Lands. It’s a dangerous place, the magic that fuels it is fierce and untamed, and persuasive enough that the legends about those who stray from the paths are full of wonder or terror or death.

Or nothing at all.

The sky, deepest blue and curved like a huge bowl overhead, brightened. A hot yellow sun blazed like a furnace and in seconds sweat slicked between my breasts and down my spine. I scanned the area. Before me was a beach of golden sand that stretched further than I could see. On one side was a white cliff with a sand-coloured camouflage tent pitched at its base, shadowed by the overhang: Tavish’s home, or at least its current façade. On the other side of the beach was a glittering, mirror-dark sea, but the water was still and silent, and probably as deep as the abyss.

Damn, that so wasn’t a good start.

He was sitting at the water’s edge, half-submerged, with his back to me. I could see his long legs stretched out in the shallows, his arms braced behind him on the sand as he raised his face to the sun. The bottle-green dreads that streamed down his back looked like seaweed hung out to dry; the silver-beaded tips glinting in the sunlight. He didn’t acknowledge me. I shrugged out of my jacket, sighing in relief as a cool breeze teased around me, and kicked off the old trainers then walked down the dozen steps to the beach. The sand was pleasantly warm beneath my feet, not as burning-hot as the fiery sun would suggest . . . but this was Between. And expecting Between to follow the rules of the humans’ world was a recipe for disaster.

When I was close enough to see Tavish’s delicate gills flare like black lace fans either side of his neck, but far enough away – from him and the water – that I almost felt safe, I stopped.

‘Long time nae see, doll.’ He turned to look at me over his shoulder, his face breaking into a welcoming smile, his sharp-pointed teeth white against the darkness of his skin – not black, but the deepest green found where the sunlight just penetrates the depths of the sea. ‘But you took your own sweet time getting here. I’ve been expecting you this last two days.’

I smiled back, couldn’t help myself as my magic exalted at the sight of him. I sat where I was, crossing my legs Indian-style, and trailed my fingers through the soft sand. Tavish might be centuries old – he’s cagey about how many – but like most fae he didn’t look like he’d reached thirty yet. He’s the most fae-looking of all those I know, and yet somehow he still easily passes for human without using a Glamour. His long, angular features, Roman-straight nose and almost pointed chin are a less delicate, more male face than my own, but with enough echoes of my own face that anyone can see the sidhe in his make-up. I’d often wondered if he wasn’t a lot older than anyone guessed, maybe even born in the Shining Times, when the sidhe would procreate with any living thing that attracted their attention. Only Tavish doesn’t have our cat-like pupils – or any pupils at all; his eyes are a brilliant silver with a rim of white, like the horse that is his other shape. He wasn’t so much handsome as compelling, alluring . . .

I dragged my gaze from him, realising I was staring like a Charm-struck human – one that would unwittingly follow the kelpie anywhere, even into the treacherous water – and made an effort to look at the rest of the scenery.

‘The place looks different,’ I said as an opener. ‘More tropical than your last.’

‘Aye, well, I fancied a wee change,’ he said, his accent soft and warm. ‘This time o’ year the Highlands can be a wee bit blowy, for all the heather colours the hills with nature’s own beauty.’

I waved back at the abyss. ‘So what happened with that?’

‘Hmph,’ he snorted, ‘’twas nae in the plan, though you’re in luck, for it had a hankering to be this side of the steps, got itself all decked out with one of those rope and plank bridges. It took me a heck of a while to convince the magic to move it over there.’

Which is Between all over. It’s malleable – unlike the humans’ world or the Fair Lands – in fact, malleable enough that anyone with enough magical mojo can impose their will. But sometimes the magic comes up with its own quirky interpretation of what it’s asked for. Tavish had forged his patch a couple of centuries ago, but even after moulding it to his own desires for all that time, it looked like the magic could still leave him living on a knife’s edge – or rather, a cliff’s edge . . .

‘It wants something,’ I murmured, frowning.

**
So if you had the magic to mould your own piece of Between, where or what would you base it on? Leave a comment to be entered into the giveaway for winner’s choice of one of my books (Int.).

The Cold Kiss of Death: When sidhe fae Genny Taylor’s friend is murdered and all evidence points to her, she goes on the run. But she’s being pursued by some of the most powerful supernaturals in town – and one of them is most certainly the killer.

Suzanne is giving away a signed book and as mentioned, the giveaway is international.