I’m doing something a little new on Saturdays…it’s a group sort of thing, so you can ramble over to the other author blogs and check out their snippets, too.  🙂

There are themes and this theme is…something public…

This is from Broken 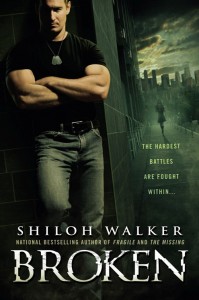 “Told you…I got in somebody’s way.” He jerked a shoulder in a restless shrug.  “The man wasn’t happy with me.”

“You got in somebody’s way.”  She should have just let it go at that, but now she was even more curious.  The faint smirk on his lips only added to her curiosity, too.  It was like he was amused over the fact that he’d gotten hit over being in somebody’s way.

“Yeah.”  The smirk widened a little and a wicked light starting to gleam in his eyes.

“Come on, Quinn.”  Sara rolled her eyes. “There’s more to it than that.  I don’t see you as the kind of guy somebody would hit because you got in their way.”

“Maybe he didn’t like my attitude, or what I told him he could do with his complaints.  Which was basically to fu…uh…shove it.”

Sara snickered.  “I’ve heard the word before, Quinn.” The restaurant was fairly quiet, but she kept her voice low.

“My dad heard me talking that way around a lady, I’d never hear the end of it,” he said with another one of those restless shrugs.

His lip curled in a sneer.  Something cold and flat flashed through his eyes.  But his voice was level as he said, “No.  Not my mom.  She’s dead.”

“Oh…I’m sorry.” Looking down, she studied the scarred wooden surface of the table.  “My mom died a few years ago.  I still miss her.”

“I don’t miss my mother, Sara.  We didn’t have a good relationship.”

The words were so flatly stated, so cold, so unemotional.  And his eyes, they were like winter ice.

“I’m sorry,” she said again.  What else could she say?  She hurt for him, though. There was a story there, and it wasn’t a happy one.

Quinn sighed.  It was a heavy sound and when she looked back up, those wounds she’d glimpsed in his eyes were there again—naked misery, pain, loneliness.  He scrubbed his hands over his face and then swore, wincing as he gingerly touched his bruised cheekbone.  “Shit, I forgot about that.”

“I’ve been hit a time or two.  Guess you get used to it after a while.”

Sara had her doubts about that—she wasn’t sure anybody could ever get used to having a mark put on them.

The ache in her heart grew.  Although he wouldn’t share any more than that, Sara sensed of a world of pain hidden behind those emotionless words.  But she knew how miserable it was to talk about painful subjects, especially when you wanted nothing more than to forget.  Forcing a smile, she reached across the table and brushed her fingers over the back of his hand.  “Then we won’t talk about her.”

The ice in his gaze melted away, replaced by an intensity that had her heart skipping a few beats.  Eyes hooded, he studied her.  He turned his hand over and caught hers, twined their fingers together. From under his lashes, he studied her and the look in his eyes was hot.  Hot enough to sear, scorch, burn… He lifted her hand and pressed his lips to the back of it.

“What would you like to talk about?” he whispered, his voice low and rough.

Part of her wanted to say You.  If he didn’t want to talk about his mother, that was fine.  She wanted to know more about him.  But there were problems with that.  That kind of conversation tended to be two-way.  He’d expect her to talk about herself.  She couldn’t do that.

“Who says we have to talk about anything?”

His lips trailed over her skin, left a sizzling, hot trail in its wake.  “Always thought talking was overrated myself.”

Hell.  He wasn’t kidding.  Licking her lips, Sara tried not to whimper as he turned her wrist over and kissed the soft, sensitive flesh on the inside.

Shooting her a look from under his lashes, Quinn opened his lips and touched his tongue to her skin.  She stared at him, her eyes half-closed, the warm velvety brown hot and sweet—melted chocolate.  Looking into her eyes made him think of melted chocolate, sweet and rich.

Up until recently, he hadn’t ever had much of a sweet tooth, but damn if he didn’t want a better taste of her.   Raking his teeth over the soft skin of her wrist, he said gruffly, “You really shouldn’t look at me like that in a public place, Sara.”

“Look at you how?” she asked, her voice almost as hoarse as his own.  She blinked at him, looking a little dazed.

Before he could answer, they heard a crash off in the distance, followed by the sound of breaking glass.  As a few of the customers in the restaurant started to applaud, Quinn leaned back against the seat and slouched down.

“Like that,” he muttered.  He shifted a little on the seat, uncomfortable.  But there wasn’t a whole lot he could to do about it, not sitting in a public place, wearing a pair of jeans and sporting an erection so hard, it hurt.  “The way you’re looking at me now.  It could get us both in all kinds of trouble.”

“What kind of trouble?” Then she blushed, almost like she wished she hadn’t asked.

One Reply to “Saturday Snippets…”