Another older EC title…remember, they’ve cut prices at places like ARe, Kindle and Nook! 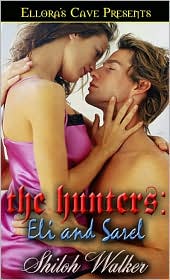 Eli was going to die over it.

He had been out hunting, and hadn’t paid attention. His prey had been a child molesting bastard. He never made it to the pervert’s house.

As he stumbled to his knees, agony tearing through him, he decided that was his number one regret.

If he had known he’d never see another moonrise, he would have made certain Tori and Declan knew about this kill before he had left the house.

But he hadn’t been expecting this.

The warning Malachi had issued had fallen to the back of his mind.

Hell, it had been nearly a fucking year since Malachi had shown his face and not one sign of this supposed girl who wanted him dead.

Now he had a thick arrow—more like a spear than anything else—piercing his chest. Tinged with the scent of human blood, soaked in garlic, rubbed with some herb that he suspected was toxic to a vampire, and he was going to die. Eli summoned what little strength he still had and called out to his people. Hopefully some of his wolves could arrive in time. Quickly he sent a final, urgent command to Jonathan to take care of his prey and the child. Jonathan wasn’t a true Hunter, not yet, but he would be in time and any were could handle one fucking, perverted child molester.

At least he could die knowing the little girl would be saved.

Behind him he heard footsteps, smelled a soft, sweet perfume and the musk of woman but he was too fucking weak to turn his head and look at his killer.

Soft, pleased laughter filled the air, but a bay rent the night and the woman cursed. “Seeing as how I don’t want to die, and I know how many steps it takes to make sure a vampire is dead,” she whispered in his ear from where she knelt behind him, “I think I will have to run.

“But I will see you dead. Until that happens, I have the pleasure of knowing you will suffer.”

Eli coughed up blood, gagging, and spat it out as he fell forward, catching his weight on one hand. “Mind if I ask why you want me dead, witch?”

“Because you stole someone from me,” she purred, her voice a soft seductive caress even to his dying ears. “Five years ago, a man and child died because of you…”

God help him, if Eli had possessed the strength, and the blood, that low, sexy voice would have made his cock hard as a pike without him even seeing the woman.

That was the last thing he remembered before he tumbled into oblivion.

2 Replies to “Hunters Eli and Sarel”