(FYI, I know the print might be too small for some people-if you can’t read it, check it out online here…) 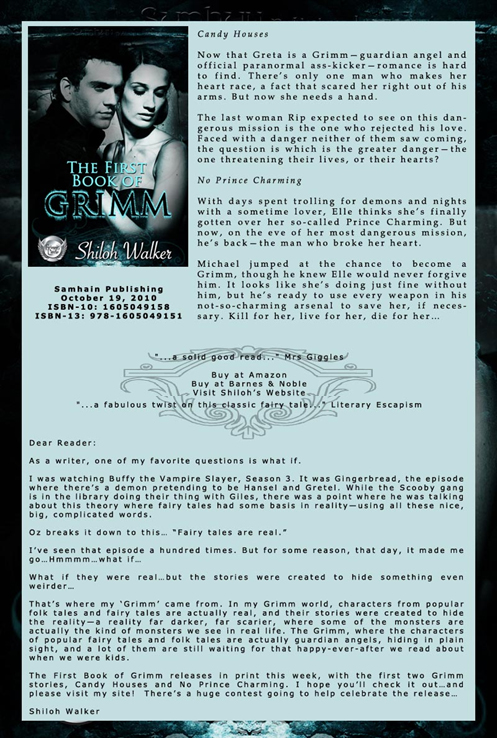 The links don’t work but that’s okay, I can post those here…

Just a reminder-until 10/25, there are two BIG things going on with this book…

The Contest for the Nook:

Would you like to win a Nook Wifi? You can… here’s how.  Buy The First Book of Grimm-either preorder it or buy the first week of release, provide me with the proof of purchase and you’re entered.  It’s as easy as that.

the rest of the details are here…

Every self respecting fairy tale comes with a castle, right?

Except I don’t think mine are exactly self-respecting…since I was too busy bastardizing them to worry about those sort of things. So since I didn’t give you the castle then, how about now?

Candy Houses and No Prince Charming are going into print this October. To celebrate, I’m giving away fairy tale castles. Well…sort of. Bookmarks**. 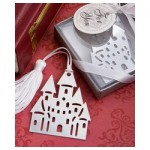 Yes… giving them away.

Here’s how it works. You send me your register receipt-from the store… (sorry, must be purchased in the store for this giveaway) dated between 10/19/2010-10/25/2010…and I’ll send you the bookmark, along with one of the printed bookmarks done for The First Book of Grimm.

It’s that simple. You just send me the receipt, and you get a bookmark.

No Prince Charming… Book 2 in The First Book of Grimm

“I’m in hell.” Michael turned away from the window, forcing himself not to stare at Elle as she sauntered towards his condo.

Alone. And in a matter of seconds, she would be alone in the condo with him.

He didn’t know whether to be glad of that fact or terrified.

“Don’t be either. Just think about the job,” he muttered.

It had been a bad, bad idea agreeing to let her come here to pick him up before they headed to the club this time.

Being alone with her was a bad, bad idea, period.

As much as he hated Ren, it was easier to do the job when he was there providing a buffer.

The first night at the club, when it had been the three of them, had been the easiest, even if he had spent much of it torn between rage and other messy emotions he couldn’t quite define.

Having Ren around had made it possible for Michael to keep some measure of control. Now he had only his own strength to rely on because he couldn’t count on Ren’s presence. The other Grimm likely wouldn’t be back—Elle had said he’d been called away to another job, so they were on their own.

At least for the time being.

For now, he’d have to rely on his own strength, his own control to get through this. And that was a laugh, because he had no control with Elle. None. No control, no strength, no tact, no sense. Nothing but need.

And in a few minutes, he’d be alone in this little condo with nothing but her…and his desperate, dark needs.

No. He’d ruined that.

All he had was this job…and the hope that he could protect her.

They’d decided it would look better if they arrived together instead of just meeting there. Elle wanted to drive and Michael imagined it was probably so she could take off running whenever she chose.

It had seemed a logical idea at the time, but now the logic wasn’t quite so clear. Especially since she was now on the porch. They were still separated by brick and mortar, but he could feel how close she was.

In a moment, she’d been in here, and they would be alone.

Alone with Elle. It was enough to make logic, control and sanity fly out the window.

The condo, perched on the edge of Lake Erie, was reclusive, remote and relatively private. It would take forty-five minutes to get to the club.

As she knocked, Michael stomped over to the bar and poured himself a snifter of brandy. He waited until he took the first sip before responding.

“Come in.” He remained where he was, staring into the cut crystal, swirling the amber liquid around. Better, he thought, better to study the pricey liquor than to look at her.

“Well, aren’t you in a happy mood today?” Elle drawled, her voice low and mocking.

Elle sauntered up to stand beside him, and from the corner of his eye, he could see the smirk on her face. She lifted his glass, sniffed it and then, with a shrug, helped herself to a drink of her own. Michael had to turn away when she closed her eyes as she sipped. It was either that or risk pouncing on her like a slobbering fool. She’d be dealing with enough of that later on.

“You don’t know how to treat good liquor,” Elle said from behind him. She gave a happy sigh and took another sip.

Michael glanced over his shoulder at her. Looking at her proved to be a mistake. Because one quick glance was not enough. Like a puppet on a string, he found himself turning around before he even realized he was doing it.

His voice edgy, he bit off, “If I was in the mind to savor, I’d savor. Right now, I’m more of a mind to get good and drunk.”

“Can you get drunk?”

“Hmm. Why don’t you put your mind to getting this job done instead?” Elle cocked a golden brow at him, still holding the snifter to her lips. They were slicked wine-red again—wine-red that matched the short silk sheath she wore. It covered her butt, barely. She wore no bra, and through that silk, he could see the outline of her nipples.

“Where did the leather and lace go?” he asked.

Michael clenched his jaw. “You don’t look like a slut.”

“Oh, I most certainly look like a slut. But that just means I’ll blend in.” She smirked as she studied his clothes. He was all in black again, a black silk shirt and tailored black trousers.

Michael narrowed his eyes at her. “You know, Elle, I really don’t care for that name.”

With an unrepentant grin, she said, “I figured as much.”

Then her face sobered, and she gestured to his clothing. “Seriously, Michael. You don’t blend. We’re going to a sex club, for crying out loud. We’re not going to the opera.”

“There is no opera here,” he replied. He glanced down at his clothes and then at hers. “I’ll leave you to play dress up, darling. I will go as I am and play the indulgent lover.”

She’d been getting ready to take another sip, but she paused, the crystal pressed against her lips. “Indulgent lover?” she echoed.

“It works as well as anything else,” he said. He shrugged, gathering his hair in his hand, securing it in a tail at his nape. “You’re the lovely woman with a wicked streak and I’m just a besotted fool who’ll do anything to keep you happy.”

It was a role Michael could play easily enough. After all, he had only been living that way for three hundred years. Silently, he laughed at himself. “Just call me a method actor.”