**Attention…pretty please read…I still don’t have a release date for Beg Me.  I’m doing this independently-releasing it through Kindle & Smashwords (which will also release it *hopefully* to Nook, iPad’s ebookstore, Sony, etc, etc).  I will not be uploading it anywhere until it’s completely done and that won’t be until I’ve had time to go through it again.  I’m working this in around other projects as well other things that are going on.  If you want to make sure you keep up to date on what’s going on with it, you might either want to sign up for my newsletter or for my RSS feedburner deal which will email my daily blogs to your email.  To get the blog emailed to you, just look at the box to the top left of the screen.   The newsletter sign up is also on the left, just a little farther down. 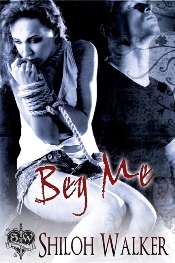 I’ve had a few people ask why I’m doing this on my own.  A couple of reasons.

I’ve gotten the edits back and once I’m done with those, I’ll get the freelance editor to go through it again, and I plan on getting a second person to do it (ummm… I’ve already got a person selected).  After that, then it’s time to format it.  This could take me a few weeks, it could take me a few days, it could take more time, could take less.  I just don’t know.  I’m working this in around my other projects, which do have to come first.  I’m also helping train a new nurse at my old day job which is taking up some time, too, as well as a new book proposal my agent just submitted.

I don’t plan on just putting it up either–I need a few weeks so I can work on a bit of promo-get it posted to my various group sites, newsletters, etc, and all of that requires some lead time.

I’d love to give people a firm date, but I just can’t.  I’m thrilled so many people are excited about it, but trust me… you’ll be happier if it’s edited-some of the typos and stuff I make?  They are insane.

Also, I’m probably not going to be around much to talk about this book (or any book) for a few days… a friend of ours died late last week and I’m attending a funeral today.   I’ll probably need a few more days before I’m up to feeling social.

One Reply to “more on Beg Me”