I’m not quite sure how it happened, but we knocked hands. The glass she’d been holding in the other wobbled, then fell.  It hit the counter, bounced off then fell to the Italian marble floor where it shattered into a million pieces.

And Sabrina stood there in her bare feet.

One thing I’d learned about Sabrina was that if she was comfortable, those shoes came right off.  I’d gotten used to see her pace around my office or Kelly’s sans shoes as she discussed some scheduling point or suggested a certain charity event.

Now her feet were surrounded by shards of glass.

Without thinking, I stepped closer and caught her around the waist, then swung her up into my arms.

“Sure.  After we get you out of the pile of glass.”

“You’re going to break your back, carrying me.”

The absurdity of the thought made me laugh and I looked at her face as I lowered her onto the stool I’d just vacated.  Her cheeks were flushed, eyes overbright.

My laughter faded. I couldn’t even remember what had brought it on as I stared down at her.

That was what did it.

That little catch in her breathing, as she sucked in a broken gasp of air was what did me in.  It was like she wasn’t just drawing in air, but me, too. I didn’t stop to question the urge or myself or anything as I cupped her face in my hands and lowered my mouth to hers.

She tasted like citrus, the tart flavor of the lemonade sweeter than anything I could remember in recent history.  I stroked my tongue into her mouth, already thirsty for more.

She sat there, all but frozen and just when I’d managed to convince myself to stop, she suddenly came to life.  It was like a flashfire had enveloped her—and me. Heat sprang up between us. She curled her arms around my neck and opened for me.

I shifted closer, bumping into her knees. She spread them wider and I caught her around the hips, dragging her to the edge of the stool.

The sound of it was heady, almost intoxicating.

The sound of the voice didn’t connect at first.

When it did, I decided then and there that the next possible chance I had to kick my brother’s ass, I’d do it.

Because Words Belong to Everybody

This all seems a little…cocky, doesn’t it?

Some of you might be wondering what the cock is going on with this book, and yes…this book did come about because of a certain incident in which an author attempted to trademark a commonly used word…”Cocky”.

It was a big dust-up and as often happens with writers, the whole debacle inspired a story, this one. Read how it came about here.

Check out the first story in the Cochrans of Cocker County…Forever Cocky, available in the Cocky Cockers anthology 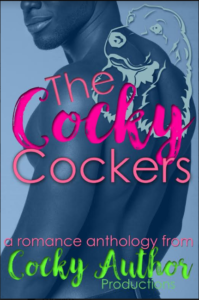