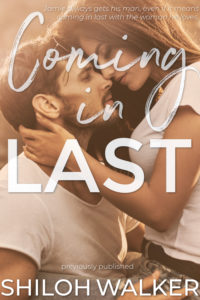 Private investigator Jamie McAdams couldn't exactly say the quiet woman running the daycare at his godfather's factory looked like an embezzler, but all the clues did point to her. She wouldn't have easy access to the money but out of everybody he'd investigated, she was the only one sticking out and she lived seriously outside her means.He didn't like it and not just because things didn't add up in a way he liked. Andi Morrow smelled like vanilla, tasted like sex, and moved like sin. Before long, he was hooked. It only took a few more days for him to figure out the obvious--she was being framed. But maybe he should have told her that, before they used her as bait to catch the real embezzler. Jamie always gets his man, even if it means coming in last with the woman he's fallen in love with. This title has been previously published.

Nearly an hour later, Andi closed her eyes and relived those brief moments in the tiny little office, relived the feel of his hands on her, his mouth on her, and the dazed look in his eyes when he had said, I can’t keep my damn hands off of you.

Nothing could stop the swell of feminine pride that bubbled within her.

As drop-dead gorgeous as he was, as smart and funny and sly as he was, Jamie could probably have damn near any woman he wanted, and probably had. And he was unable to keep his hands off of her.

I want the first time to be someplace quiet, someplace private, where I can make you scream yourself hoarse while I fuck your brains out.

Quiet, ordinary Andi Morrow, who had gone through high school with only a handful of dates. Granted, her sharp tongue and wisecracks had scared more than a few away. Not too many had been willing to risk getting close to her. She had handed out barbs and cold glares the way other girls had handed out flirtations and smiles.

Jamie had not only gotten past that, he had gotten close enough to touch her. To make her yearn to touch him. And he wanted more.

It wasn’t that she had never been told that before. She had. But she had never been tempted before, had never felt this drawn to a man before. And never had she been told that by a man like Jamie, a man who commanded attention simply by walking into a room, a man that had women rolling their eyes and smiling as he walked by. Never by a man who made her mouth go dry and other parts turn wet. Even thinking about him was enough to make her wet, enough to make a slow, aching throb pulse through her cleft.

Her head fell back and she stared at the ceiling. How in the hell would he react to her being a virgin?

She wasn’t too concerned about the actual act. For crying out loud, she wrote romances. She knew plenty about sex. But all of her knowledge was second hand. She had never burned for a man’s hands on her before, had never craved to feel a man’s weight atop her.

Had never thought that just listening to a man talk to her the way Jamie did would turn her on.

She’d been perfectly happy to live vicariously through her heroines.

She wanted to be in his bed, wanted to wake up next to him in the morning.

She wanted to know if he could actually fulfill the promises his eyes and hands had made. Wanted to lie under him while he made her scream herself hoarse.

And she’d be damned if she let the chance slip past her.