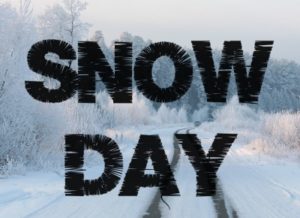 Cabin fever…was the phrase coined by a parent who was trapped in a house with kids after too many snows days?

I ended up doing what any sane writer would do.  I left the house, went to the nearest restaurant and sat in the bar, had a partially liquid lunch and wrote like a fiend.

Usually they decide they want to shovel driveways or something to earn some money but not this time around.  I think the temperatures of oh…11 degrees had something to do with it. Probably why they aren’t outside playing in the snow as much either.

Guitar kid was supposed to have a recording session on Monday but that got called on account of snow, too.

One thing is obvious though…they better not cancel school again or I’m going to go out and clear the roads myself.