Are you in or near Orlando?  Come hang out at #SBC16. I’m going to be there next week!  After I’m done getting my pants scared off at Universal Halloween Horror Nights, then after me and the kids are done playing at Hogwarts, I’ll be spending Saturday with readers at Shameless Book Con. 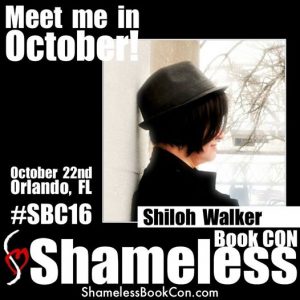 Tickets are still on sale… check it out here!

Reminder… I’ve got some books stuffs going on this month.

Belonging will be reissued at a new, lower (and I mean much lower) price this coming Monday.

Being a vampire can suck. Corinne Lewis will be the first to testify to that. She went through the “change” but it certainly didn’t change her all that much.

Still shy, quiet and a wallflower, she doesn’t fit in with the rest of the vampires or other paranormal creatures at Excelsior, the school that trains the elite Hunters. She lives there now, working for the people who took her in after the vampire attack that changed her and left her too afraid to cope with undead life—and everything else.

Of course…there are some changes, and they are awkward. She was never really liked sex, always thought she might be frigid, but now she needs it. A lot. One night, unable to go to the men at Excelsior, she goes in search of a one-night stand and finds herself facing a blast from the past.

But once he discovers who she is, can he forgive her?

And can she let him go?

includes two bonus stories… Back From Hell and Nebulous.

These. I want these.

These are the Raven gloves.  I want them the most but I like almost all of them. Go look. Pick your favorites.