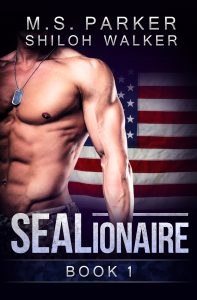 Navy SEAL, Adam “Reaper” Dedman, has lost almost everything he holds dear, and is about to lose the last thing that’s keeping him alive – his career in the US Navy.

After Reaper gets arrested for nearly killing five men in a bar fight, a mystery women, Olivia “O” Darling shows up, telling him she’s there to help him. That his life not over. In fact, it could be just beginning. All he has to do is agree to meet the father he’s never known.

But Reaper isn’t big on the forgive and forget part. His dad was never part of his life in the past. Why now? Besides, he doesn’t have time for complications. The US Navy is looking to hammer him for the trouble he’s caused. So everything else will have to wait. And that includes the sexy Olivia Darling.

My gut twisted and burned.  Not just with shame, but with rage, directed at myself.  I’d dishonored my mother, my rank.  What were the chances it was my superior out there, looking to peel some skin off my hide?  The guy with the brain bleed…shit, I couldn’t feel bad about that. He’d come at my back and I’d done what I was trained to do.  But I wouldn’t have been in jail for him to come at my back if I hadn’t been stupid enough—angry enough—to goad a couple of assholes into a fight at some no-name dive.

The cop behind me nudged me aside and opened a door, stepping out of the way so I could enter.  Taking one breath to brace myself, I stepped inside.

That bracing breath escaped in a soft sigh as I found myself staring at a complete and total stranger.

A sexy one, too, clad in a neat black suit that had probably been selected because it was prim and proper, with a short, fitted jacket and trousers that were equally fitted and made me aware that her ass was top-rate.

Short black hair felt in the middle of her neck.  She stood with her back to me, staring out a window not much bigger than a couple of shoeboxes. Strong stubborn shoulders and a long, elegant back tapered down to a narrow waist before flaring out to the kind of hips a man could fill his hands with. Idly, I wondered if her skin was as soft and pale as it looked.

When the door closed, she turned to me.

I almost had to take another breath, because her eyes were…shocking.

Purple-blue.  Kind of like some of the flowers my mom liked—had liked…she was gone now.  A wave of grief tried slam into me but I shoved it down.

Taking a few steps into the room, still holding her gaze, I waited for her to speak.

“I don’t recall retaining a lawyer,” I said finally.

“Shall I ask them to undo your cuffs?” she asked.

Cocking a brow, I said, “In the past six hours, I’ve sent five guys to the hospital.  That might not be a wise move on your part.”

“Well, I don’t plan on picking a fight with you, Chief Dedman.”  She leaned back in the chair, her lips curving in a quick smile.  “Maybe it’s me, but I think it’s kind of stupid to pick a fight with a Navy SEAL.”

Heaving out a sigh, I let my head fall back.  “Did Lieutenant Commander Hawkins send you?”

“No.”  There was a pause, very brief, and in that silence, I heard her take a deep breath.  “It wasn’t your commander, sir.”

That had me straightening, once more staring at her.  She met my gaze levelly but from the corner of my eye, I saw that she was gripping a pen tightly, so tightly that her knuckles were pressing sharp against her skin.  Those amazing, purple-blue eyes briefly flicked away and I let my gaze drift down to her mouth.  It was soft, almost too soft for her face.  The kind of soft that made a man think about kissing her, but that stubborn, strong jaw was almost enough to make a man think twice.

Her eyes swung back to mine just as I forced myself to push those thoughts aside.  Her lips parted and she took a deep breath, once more bracing herself.

“Chief Dedman…” She paused, then a faint smile appeared on her lips.  “I imagine you’ve heard this before, but that’s an intimidating last name.”

“Yeah.” I lifted a shoulder.  “Mom says it came from her family, way back before they moved over here from England—they were gravediggers.  Dead man.  One of those trade names like Baker or Farmer.”

“Baker or Farmer would be much less intimidating.”  She was still smiling and it got me to thinking about kissing her again.

“Yeah, well. You ought to hear what my friends call me.”

“Reaper.” Cocking my head, I waited for her to connect the dots.

“Deadman.  The Grim Reaper. Hmm.”  She nodded and blew out a slow breath.  “I guess your friends think it’s funny.”