New book out today…for those who prefer print, my two ebook novellas, The Unwanted and The Innocent are now available!

This is not a new title. It contains two titles previously only available in ebook, The Unwanted & The Innocent. 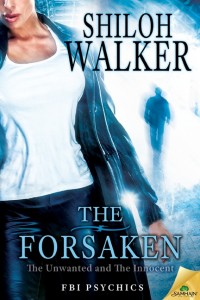 Love can be heaven…or Hell.

The Unwanted
Destin’s psychic gift for tracking down violent rapists is rough on relationships. Caleb was the only man who didn’t think her a freak-and he walked away. But now her boss wants them to work a particularly horrendous case.

For Caleb, leaving was an act of self-preservation. Forced to work together one last time, he knows if he lowers his shields for an instant, there will be no resisting the temptation to lose himself in her wild power.

But to catch the rapist, it’s exactly what he’ll have to do.

The Innocent
Jay has journeyed to Hell, Georgia, to pick a bone with the sort-of boyfriend who abruptly severed their hot-and-heavy cyber link. But no touching. Her psychic abilities make physical contact…complicated.

With corruption rampant in his town, Linc has no time to nurse Jay’s broken heart. Until he discovers the woman who’s afraid to touch him could actually be his best chance.

Warning: Contains tortured souls who have lost love and pined for their missing half, a woman who can see evil, a hot FBI agent, a not-so-naive virgin, a pissed-off former cop, lots of frustration, if you know what I mean, and more trouble than either of them know what to do with.

Linc groaned and reached down, steadying her with one hand on her hip.  “Stop it, Jay.  Look at me.”

She focused on his eyes, even though his chest was moving in a ragged rhythm against her own and the sensation of it had her nipples drawing tight, her breasts aching.

“How long?” he asked, his voice tight.

She blinked, confused.  “What?”

“Ahhhh…”  She licked her lips.

His gaze dropped to her mouth.

Oh…he could be distracted?  She slid a hand up his chest, curved it over his neck and started to tug him down to meet her mouth.  He started to comply but then he growled, tugging away.

That just sent him deeper and she whimpered, instinctively pressing her hips back into the mattress even as pleasure twisted through her.

“That’s it.”  Linc caught her wrists, pinned them over her head.

She glared at him.

He glared back, but ruined it by dipping his head and tracing the line of her mouth with his tongue.  “Tell me, Jay.”  He circled his hips against her as he spoke and the soft, teasing little motions coaxed her into relaxing and she shuddered as he slid deeper.

“I…” Her breath caught in her lungs and then sighed, curling her captured hands into fists as he sank so far in, she could almost feel the heat of his pelvis pressing against her own.  “I…never, Linc.”

He tensed.  Then, abruptly, he stilled, his weight braced on one trembling elbow as he pressed his brow to her chest.

Sliding one hand up his side, she held her breath.  What was he going to do?

His lips brushed against her skin, a silken caress.

One Reply to “The Forsaken…The FBI Psychics”