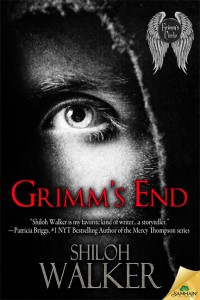 With all hell breaking loose on earth, only two Grimm can be spared for the mission to retrieve their leader—Mandy and the only otherGrimm crazy enough to go with her.

Warning:  This book contains too much angst, too many secrets, and two people who long to be together. It’s also the end of a long, fun ride. Thanks for taking it.

This will be the final story in the Grimm’s Circle series.  If you haven’t read the Grimm and enjoy fairy tale retellings, you can read more about the series here.

I tried hard not to look at the ruin of the castle.

When I did, I saw it as I had in my dream, the imposing, majestic power of it.  And I saw him.

Pulling me to him, stroking my face, my hair.

Then fading, as I woke.

It was easier to see the castle now, in a crumbling ruin,

Considering what had happened here, the grass should be withered and brown and…

There shouldn’t be any grass.

Withered and brown grass, after all, could become green again.  I’d seen it.  All you had to have was some rain.  Some sun.  The right conditions and anything could thrive.

No.  There shouldn’t be any grass here.

And maybe a marker.

Something ugly and bleak to mark what I had lost.

Instead there was green grass.

The ruin of the castle, somehow beautiful despite its decay, rose into the air, a testament to time and to tragedy.

Perhaps that was the marker.

Bending forward, I curled my hand into the pliant green blades and closed my eyes.

I could still taste the snow in the air.

I could still see his face before me.

I could feel his warmth against my skin and that surreal power blasting against my shields.

It had been two years.

Two years since Will had stood before me.

“No!” The panic that had blindly driven her for the past few days was gone.  No Mandy realized.  It wasn’t gone.  It just wasn’t blind any more.  As she hurtled toward Will, past that gaping void that opened into something so terrible her mind didn’t want to accept it, Mandy focused on one thing.  And one thing alone.

She drove her fist into his chest—a pointless sort of punch, but it was all she could do at that moment.  Will’s only reaction was to reach out and cup her face.

“You son of a bitch.”  She tangled her hands in his hair—white as the fallen snow, softer than the finest silk.  It felt oddly warm, almost alive.  She jerked his head toward hers, pressed her brow to his.  Her heart was breaking. “You can’t do this to me. Don’t you know what you’re doing?”

“Yes.” His voice was gentle and that hurt her even more. “Because I’m doing it to me as well. But you must understand. This, you, me…it could have never happened. Happiness was something I was never meant to have. And you would have made me happy.”

When he kissed her, Mandy thought she would die.  If pain alone could kill an angel, in that moment, her heart would have stopped.

She wished it would have.

“If I could have let myself,” Will murmured softly. “I would have loved you.”

preorder links to be posted as available