The Virgin’s Night Out 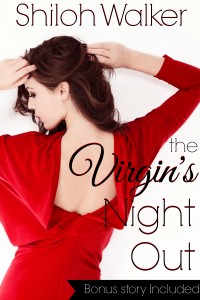 Sloane Redding is the shy one, the timid one. The morning of her wedding, she’s dumped by the man she’d thought she’d spend the rest of her life with. Humiliated, she turns tail and runs, leaving Nowhere, Alabama for a job in the city. Sloane sets out to remake herself. She succeeds…on the outside. On the inside? Different story. She still the shy Redding. Still quiet, still more interested in standing on the standlines. But all of that is about to change.

The night before her brother’s wedding, she strolls in the lone bar in Nowhere wearing wicked red and she’s got one goal in mind: to show her ex-fiance just what he lost.

The night before his best friend’s wedding, D.B. “Boone” Cassidy walks into the lone bar in Nowhere, Alabama with one goal in mind. Get wasted. Former military, he’s spent the past few years as a security specialist and all around troubleshooter. It should have been easy to spot the trouble that night…a sexy woman in wicked red. It should have been easy. Yeah, right.

One thing leads to another and his plans to get wasted turn into a night with the sexy woman in red . Boone gets the shock of his life the next day when he shows up at his friend’s wedding to find out he’d just spent the night wrapped around his best friend’s little sister…and that isn’t the only surprise.

As soon as she said, Sloane wanted to take the words back.

Too big, too intense and the temper that had driven her with Rodney had faded, sapping her courage with it. Now, as pale green eyes settled on her face, she swallowed.

He was going to say no.

She could already see it.

With the last bit of nerve she had left in her, she forced one more smile. “You know what? Never mind.”

She went to brush past him and his hand caught her arm. “I hadn’t quite finished mine. Why don’t you sit down with me?”

She tilted her head back and met his eyes. For one brief moment, that connection seemed to sizzle, seemed to burn. Sit down with him. Have a drink. Talk—talk about what?

In the span of what felt like minutes, her mind raced over what he’d consider the boring emptiness of her life. It would take up two minutes, he’d hurry through his drink and leave.

“Dance with me instead.”

For the second time that night—the third, the fourth?—she’d surprised herself, but as the music shifted into a slow song, she caught his hand and back onto the dance floor just a few feet away. He didn’t budge at first. Maybe she should have just cut and run…

She looked up at him, an apology on her lips.

But the words died as a shudder rolled through her. Muscles in his thighs flexed—she could feel it. Pressed this close to him, she thought she could feel just about everything. The hand he had on the base of her spine fisted and she licked her lips nervously.

His gaze fell to her mouth.

In the packed, crowded bar, surrounded by maybe fifty other swaying couples, Sloane felt like she was suddenly alone with this man—a man whose name she didn’t know—and she had a burning desire to close to distance between them and kiss him.

And since she seemed to be riding the crazy train to nowhere, she did just that, leaning forward and doing yet one more thing she’d never imagined herself doing.

She kissed a total stranger.

I’ll give away some review copies–I’ve yet to determine how many.

You can get ONE entry by leaving a comment.

Get a second entry by adding to your GR shelf Link [ here ]~ if you don’t want to leave link to your GR’s profile, then you can email your profile to shilohwalker2011 at gmail.com.

That’s it.  I don’t know how many copies I’ll give away.  Depends on participation.  If I get a lot of entries, I may limit it to two copies per 25 comments.  If I only get a few, I may give copies to everybody who enters.