We saw Maleficent… I liked it. It was fun and a great kid’s movie. I guessed a few twists, and one I thought would happen didn’t, and the way it did happen was sort of hokey, although yeah, I can see why they did it.

But all in all, definitely worth seeing, especially if you like fairy tale twists. My seven year liked it and keep in mind, bratlet has some serious ADHD, so if it held her attention, that’s saying something. It does have some scenes that might bother younger kids, and bratlet doesn’t get scared too easy, so don’t use my opinion there on taking kids her age or anything. 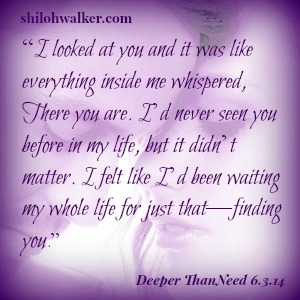 “This is insane, Noah,” she whispered.

“It’s beyond insane . . . and you felt it, too.” His hand was at her hip now and she forced her lids up as she met his gaze.

“I felt it.” On a shaky breath, she pressed her brow to his and told him, “I looked at you and it was like every-thing inside me whispered, There you are. I’d never seen you before in my life, but it didn’t matter. I felt like I’d been waiting my whole life for just that—finding you.”

The world turned into a dizzying blur around her and she clutched at him, crying out in surprise as he caught her up in his arms. A moment later, she was caught between him and the wall and she thought maybe, just maybe, this was the one time she didn’t mind being in this house. The feel of his chest against hers, his hips pressing square against her through the layers of her skirt.

The blue of his eyes burned like fire as he caught her face in one hand, angling her head back until all she could see was him.

“We found each other.” His voice was hungry, hot and hoarse as he bent down, rubbed his mouth against hers. “All that matters. I don’t want to hear you worrying that this is anything but what it is . . . it’s for us.”

Just a couple of days… did you pre-order?  Keep in mind that although this is mass-market, you can’t guarantee it will be in your local store, so it doesn’t hurt to ask in advance.  Now is a good time! 😉  Also, if you hit stores like B&N or BAMM and you don’t see it, it doesn’t hurt to ask up front (not for this book or any other you want on release day that you can’t find.)  Sometimes the book you want is sitting in the back still boxed up.

And now, prepare for cuteness attack.