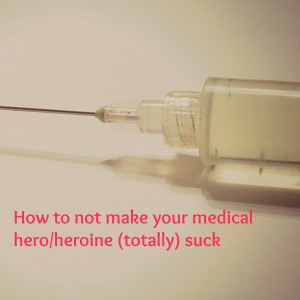 This is going to be a hodge-podge.

Now nurses know this stuff.  And hospitals (and doctor offices) are dirty places.  People get sick there.  So we are always washing our hands.  We carry alcohol sanitizer in our pockets.

Want your nurse or doctor be believable? One way to add to that? Have them washing their hands more.  We do it between each patient.  We do it before and after changing bandages.  We do it all the time.

If it’s in the workplace, there are probably posters up… they are all over the place in the health care setting. Posters on how to wash your hands… it’s not just shoving your hands under the water for fifteen seconds. You don’t have to detail the handwashing, but if she sees the poster on handwashing? That’s just another way to craft a believable medical character, showing things that she’d see every day.

Sore feet & pens… eh, I can’t really give you hard and fast facts on the sore feet thing or pens, but we spend most of the day on our feet, usually on tile floors.  If you’ve ever worked on your feet, you can imagine how tired your feet get.  We like comfortable shoes. And my pens were always disappearing or getting swiped.  By a doctor, another nurse, left in a room. Sometimes, though, I was the pen thief.

Things that you see that don’t really happen:

Sex in the workplace…

I haven’t seen a nurse in a white hat since my clinicals and there was only one nurse who wore it.  She said she’d worked too hard to get it and she’d continue to wear it, thank you very much.  I’ve been in a lot of hospitals.

When I was talking about this on twitter, I asked for feedback…none of the nurses, EMTs, doctors I know can think of any place that require the white hat, or for that matter, for the nurses to wear that stereotyped white uniform.

CPR on a bed/bent elbows

On TV, you’ll see a person give CPR and their elbows are all bent, the patient will start talking after… you’ll see CPR taking place on a bed…

CPR has to be on a flat, unyielding surface to be effective.  The person administering CPR has to lock their elbows.  CPR is brutal.  We’re told when we get the training-and we get it often…I take it every two years-you might hear a crack…ribs can break.  You can’t get the force you need to jumpstart the heart if the patient is on a nice, comfy bed or if you have spaghetti arms.

Sidenote, while I have fortunately never had to administer CPR, when I was flying back from Alaska years ago, a passenger on the flight needed CPR.  We had to touch down briefly to get him off the plane after they’d managed to get his heart started.  A few people were freaking out… they didn’t get him breathing, he’s still dead…  CPR isn’t pretty.  People don’t stop breathing, lose their pulse and then have somebody pound on their chest and come back from that two minutes later and jump up, ready to dance.

Know why they tell you to use aspirin if you suspect you’re having a heart attack, your guy, your mom, neighbor, etc, etc?  It thins the blood, helps prevent clotting. So it can buy time on the way to get emergency help.  That’s not a bad thing…in the event of a heart attack.

But say you’ve got a head injury.  Do you want to give something that can thin the blood and predispose you to bleeding?  So why does a doctor or nurse give aspirin to a person complaining of a headache after a head injury?  What about somebody who has had an ulcer?  A bleeding disorder?  Aspirin isn’t the drug of choice for a lot of reasons, but these are just a couple of them.

Hat tip to Lillie A… she read through my posts and gave me a few more points.

FYI:  None of this, absolutely none of this is to be construed as medical advice.  I’m not a doctor.