Hey…they are at the beach, that counts, right? 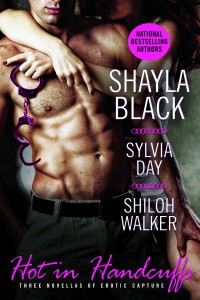 Part of my FBI Psychics series…

Even before he turned his head and saw her, he knew.  Some part of him did, at least.  He didn’t even know if he could claim it was any sort of psychic knowledge.   Certain things, people didn’t need true psychic skill to know—just instinct—and this was probably every bit as much as instinct as anything else.  The instinct that trouble was coming his way.

Trouble…five feet, nine inches of trouble and most of it was leg.  Black hair was pulled back in a braid so tight, he wouldn’t have known it was curly.  Except he had spent many, many hours with his hands fisted in those curls.  She hated them…he’d always loved them.  Her eyes, a deep, strange shade of blue-violet, so much darker than his own eyes, were hidden by sunglasses and he could only imagine the derision he’d see there.  And it would be there.  He knew it just by the sight of the slight sneer on her pretty face.

Mica Greer never had much cared for psychics.  Strange, considering she was one.  Or maybe not so strange, he supposed.  Denial wasn’t just a river in Egypt and all that.

Mica’s gift, like his own, had been unstable.  Unlike him, she hadn’t learned to stabilize it through practice alone.  She’d needed a partner, and she’d turned out to make a damn good anchor.  For a while, the two of them had worked together in training.  Her gift had grown, bloomed…as had some crazy thing between them.

Don’t go there, he thought.  Blowing out a breath, he shifted his attention back to the ocean, trying to reach for some inner peace.  It wasn’t going to come, though, and he knew it.  If she was here, on top of the insane coming at him, then it was for a reason.

I can always pretend she’s here because after all this time, she realizes she’s still in love with me.  He laughed deprecatingly.  Yeah, like that was going to happen.  Fifteen years…fifteen fucking years.  How had those years slipped away from him like that?

She came to a stop next to him, standing almost shoulder to shoulder with him.  He waited for her to say something, but it didn’t happen.  Of course, he’d also waited for her to come back to him…that hadn’t happened, either.  After a while, he’d stopped waiting.  But he’d never stopped wishing.  Never stopping wanting, either.  He’d moved on, but he hadn’t forgotten.

The waves crashed against the sand just a few inches from his feet and he stooped down, raked his fingers through the wet, watched as it filled back up in eddies and swirls before another wave came.  Mica remained silent at his back.

He could feel her turmoil, if he let himself.  Even without lowering his shields.  All he had to do was concentrate…and there.

There it was.  She didn’t want to be here, she worried about whether or not his gift had gotten stronger, whether or not he could pick anything up from her and damn it—why did he…

He smiled a little as her thoughts tumbled to a stop, almost like she’d sensed him.  “You never did learn to stop projecting so loudly,” he said softly.

“You never did learn to mind your own business,” she snapped.

He shrugged.  “I can’t help that I hear people shouting at me from the next room.  You don’t like it…” He slanted a look at her through his lashes.  “Don’t shout.  You can tone your thoughts down.  You learned how.”

Yeah, she’d learned how.  But back then, he hadn’t been quite as good at picking up random thoughts, or even direct thoughts.  Not that Colby was going to point that out to her.

Mica curled her lip at him.  He hated that he still found that so fucking appealing, hated that he wanted to reach up and tumble her down into the sand next to him and strip her naked.  So what if doing the dirty in the sand got grit in sensitive places?  The ocean was right there if they wanted to clean up after.  And his house wasn’t too far away.

It was a strong enough impulse that he could even see himself doing just that and somehow, he doubted she’d resist him if he gave it a try.  Her breathing kicked up as she stared at him.  No.  She wouldn’t resist.  Not at all.

With a heated curse, he tore his eyes away.

He thought of the blood-splattered images, of terror, and death.  The fear, the darkness that hung over him a cloud.  “I know enough,” he said softly.

A shadow fell across him and he braced himself as she crouched down beside him.  She was still a few inches away, but closer…damn it, too close.

“You’re not with the unit anymore.”

“No.” He continued to play with the sand.  Better to do that than reach for her, he decided.  And he was so damn tempted to reach.

“Almost two years ago.”  Okay, playing with the sand wasn’t going to cut it if she was going to sit there and chit-chat.  He swished his hand through the next wave to get the grit off and rose.

“You aren’t here to chat about old times, what I’ve been up to in the past fifteen years.”  Ever since you walked out on us.  He kept that last bit trapped behind his teeth.  It didn’t matter anymore—they didn’t matter because they didn’t exist.  “I’ve already told you that I can’t help you with whatever the trouble is.”

But Mica wasn’t to going to let it go that easily.  She caught his arm and that touch almost froze him.  Her bare hand on his arm—the shock rippled through him.  Memories raged.  Their memories.  Not just his.  Blood roared in his ears and a fog of need and want and a love she’d walked away from, it was rose inside him…for the briefest moment, it drowned out everything.

It faded too soon and now, it wasn’t memories that blinded him.

It was a bloodless massacre.