Going with BROKEN, one of my older titles… 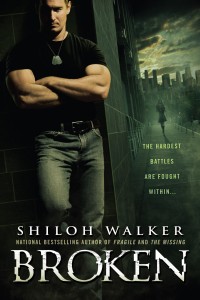 He opened the door—

And stopped dead in his tracks as somebody all but fell into his arms.  Somebody…a woman.  And not Theresa.

He caught her just above her elbows, automatically steadying her.

Then she lifted her face and Quinn found himself gazing into the biggest, brownest eyes he’d ever seen in his life.  Feeling a little dazed, he studied her face while she stammered out another apology.

He was too busy staring at her mouth.  A very pretty mouth, a cupid’s bow mouth slicked with deep, vibrant red.  Under his hands, he could feel silken smooth skin and unable to resist, he stroked a thumb along her inner arm.

Her skin was soft, soft and warm.  He was also pretty sure she had the creamiest, most flawless skin imaginable.  Her shoulder-length hair was a shade caught between blonde and brown, nondescript, but for some reason, he found himself thinking about tangling his fingers in that hair and holding her head still while he kissed that red-slicked mouth.

Well, hello…he could all but feet his libido kicking up as he stared at that mouth.  Every last one of his senses tuned in on her—

The way she looked…sex and sin.

The way she smelled…sex and sin.

The way she sounded…sex and sin.

The way she felt…the way she might taste.  Sex and sin. He knew it without a doubt.  She’d taste like sex and sin.

His mouth was all but watering.

“Ahhh…excuse me,” she said, tugging against his light hold.

“Uh…yeah.”  He uncurled his fingers and let go, although he hated every second of it.

She immediately backed away, putting a good five feet in between them and eying him nervously.  In that moment, he was acutely aware of the fact that he hadn’t bothered shaving that morning, or the morning before.  He was also acutely aware of the wrinkled state of his gray T-shirt and the worn jeans he wore.  He hadn’t gotten into the habit of wearing the unofficial uniform worn by most of the guys who worked for Gearing, but he’d swapped out the black T-shirt that read Bond Enforcement for a plain one. Wearing those particular shirts outside of work had ended up causing him a headache or two so when he remembered, he changed out of them before leaving the office.

Tearing his eyes away from the unknown woman, he smiled at his landlord.  It no longer seemed so weird to smile at somebody—as in he didn’t worry his face might crack if he wasn’t careful.  Still, the smile on his face did feel odd.  “Hey, Theresa.  I didn’t know you had company.”

She beamed at him.  “This isn’t company.  This is your new neighbor.  She just moved in to the upstairs apartment. Sara…I’d like you to meet Quinn Rafferty.  Quinn, this is Sara Davis.”

Theresa collected lost souls, as evidenced by the fact that he was living in her basement after she’d charmed him into changing her tire outside Dierburg’s a few months earlier.

The last woman to stay in that apartment had ended up being a battered woman hiding out from her ex.  Before that, it had been a girl who’d been all of nineteen, with two kids and a third on the way.   When that one had left, she’d ended up stealing from Theresa and skipping out on the piddling amount of rent that Theresa had coming.

If Sara Davis was living in Theresa’s upstairs apartment, that made her pretty much off limits.  It didn’t matter that his dormant sex drive was all of sudden flaring up on him.

The last thing Quinn needed to be around was another lost soul, not when he still struggled to find his own.
Read more

Other authors to check out…