Be warned. It’s kinky as hell so if you don’t like the kinkier side of romance, steer clear. But it’s also a beautiful romance. 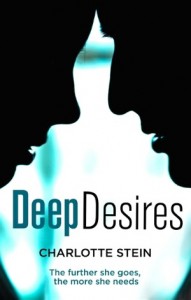 Abbie has done her best to escape her violent past. But in the process, she’s avoided love, life and desire. So when she sees her equally closed off neighbour, Ivan, performing for her one night through his window, she can’t stop looking…‘Deep Desires’ is an intense, sensual read perfect for anyone lusting after more than ‘Fifty Shades’.Voyeuristic pleasures become Abbie Gough’s lifeline. But as she comes alive and craves more, Ivan backs away. He has his own secrets, the kind that draw her into kinky games and her own shameful desires, while also preventing the bond of real intimacy between them.Now she’s found someone so special, she’s not about to give up easily. And she’s willing to do whatever it takes to melt Ivan’s dark and cool exterior. Even if captivating him means pushing through her limits to whatever lies beyond.