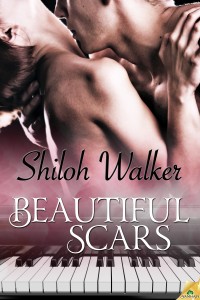 Some scars cut right to the heart.

Three years after her divorce, Chaili Bennett is over her ex. Her only problem now? Of the few men she’s dated since, no one “gets” her. Not like Marc Archer—a man who’s never seen her as more than a friend.

Marc Archer needs a date for a last-minute charity event, and he needs it fast. Not that women aren’t throwing themselves at his world-famous face and body, but sometimes it’s less messy—as in less personal—to use his sister Shera’s escort service.

The last woman on earth Marc expects to see in his sister’s office is Chaili. There’s something different about her, but nothing pleases him more when Shera sets them up. That simple date quickly evolves into much more as they both discover the other fills a deep, secret need they’ve shared with no one else.

Though Chaili insists one night is all she wants, Marc isn’t walking away now. Not until he discovers what put the shadows in her eyes. And the scars on her soul.

“I think the second taste is better than the first one.”

She opened her eyes and held the glass out to him. He took it, tried a sip and made a face. “It’s not as bad as some. Come on.” He continued to hold the glass as he caught her hand. “Grab the bottle, will you?”

“Where are we going?” she asked, trailing along behind him. The floor felt cool under her feet. She’d kicked off her shoes and the silk stockings she wore weren’t much protection.

“I want to play some more.” Over his shoulder, he glanced at her. “Is it okay?”

She arched a brow. “A private concert…with Mr. Marc Archer? You think I’m going to say no?”

The lights were off in the studio but he didn’t bother to turn them on. She wished he’d turn them on, though…it was easier to pretend this all didn’t feel terribly intimate. Terribly romantic…terribly seductive.

“Pour some more wine?” he said as they sat at the piano.

She swallowed, her throat dry…tight.

“Should I go get another glass?” she asked, pleased to hear that her voice wasn’t shaking.

“No. We can share, right?” He took a sip and then laid his hands on the keys of the piano.

Chaili closed her eyes and then muffled a groan as he went straight into “True Believer”.

“Make a believer out of me…”

His words sank deep into her soul, wrapping around her and pulling her in. He was seducing her and he didn’t even know it.

He could have kept on playing, just for her. Forever. He’d forgotten how amazing it was to do this. Playing for himself was always good. Playing for his fans…yeah, he loved that.

But there was something magic about sitting there in the dark and playing for her.

It was almost like he could talk to her through the music, and even though she said nothing back, he could hear her answer just in the way she moved, the way she smiled.

And it had always been like this, he realized.

Chaili seemed to find almost the same pleasure in the music that he did.

That same little smile bowed her pretty mouth up and she swayed, one hand curled around the wine glass, the other tapping out a rhythm on her thigh.

He had an image of catching the hem of her skirt. Pushing it up. Okay…that wasn’t anything that had happened before tonight. But he had a feeling he’d be thinking hot and dirty thoughts about her for a long, long time after this. Hell, he was wondering why he hadn’t done it before.

Closing his eyes, he tried to focus back on the music, but he couldn’t block her out.

It was all there, twining through his mind. The raw, powerful vibe of the music. The song. The image of his hands on her thighs. Pushing that pretty skirt up. Catching the silken hose she wore and dragging them down, her panties…leaving her naked under that skirt. Then he’d play a little while longer. Just a little while, as he thought about her being naked under that elegant little white dress.

Get a grip, Marc. Or you’re going to lose it before you even get started…

Get started. Was he actually thinking of trying to do this…

He must have lost his mind somewhere in the time he’d seen her standing in the office of Escortè and when he’d started playing for her back at the party, but he had every intention of having a taste of her. Just once, he thought. They were friends, right? They could have a night of nice, friendly sex and then go back to being friends…

Clearing his throat, he took the glass of wine from her. “Ah…are you wanting to head home or you wanna hang around a while?”

She slid him a smile as she took the glass of wine back. “Hey, you played me one song. That does not a concert make.”

He rolled into it, watching her a little closer this time. She was looking at his hands again. Her face was flushed, although he didn’t think it was the wine. He’d had as much as she and it was just the one bottle. Couldn’t just be the wine, right?