It’s Snippet time… from THE DEPARTED 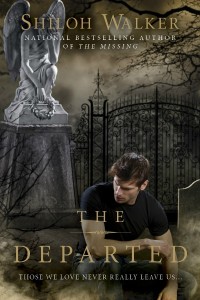 On edge.  Talk about an understatement.  She smirked.

As he started to walk out of the cemetery, she reluctantly fell into step next to him, steaming mentally and debating on whether or not she wanted to go along with his imperiousness or not.

“Whether you’re one of my people or not, you brought me here and you need to give me something to go on.  You also could probably talk to that girl and help her a hell of a lot me more than these people here can.”

She could refuse.  She knew that.  She didn’t need to go anywhere with him.  But the cold shivers running down her spine, the echoes of the departed, the strange, disturbing whispers…no, she didn’t need to be there.

And she wanted to be out of there.

If there was something or somebody here for her, she’d figure out it soon. Preferably after she’d had some rest, a few hot meals.  She was so damn tired—too many jobs, too close together.  She all but ached with exhaustion.  Maybe fate and God would be kind, though, and this would turn out to be nothing.

She could use a break.  Really.

Following Taylor out of the cemetery, she resisted the urge to the look back.   If she had, she might have seen it as the moon came out from behind a heavy bank of clouds in just that moment.

The silvery stream of light fell across one of the monuments along the far borders of the cemetery.  There was an angel there, her face upturned to the sky, her wings spread.

A sigh drifted through the cemetery, followed by a sound that was almost a sob.