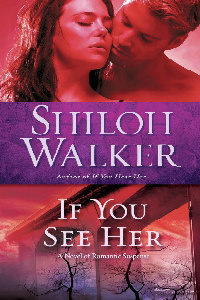 She was still standing there, dazed, when Law came into the kitchen about two minutes after the front door closed.

Still standing there, with her hand touching her lips, and her heart racing.

Remy had just kissed her.

And right before he had lifted his head, he’d whispered, “I’ve wanted to do that from the first second I laid eyes on you.”

Shaken, she looked up and saw Law standing by the island, staring at her, his face drawn tight in a worried scowl.  “You okay there?”

He leaned back against the counter, assuming almost the same pose Remy had stood in just minutes earlier.  Hope closed her eyes and then immediately wished she hadn’t, because she could see that image in her mind, the way his shirt had stretched across his shoulders, the way the light glinted off his hair.

Gulping, she opened her eyes and stared at Law.

If she’d expected Law to be shocked, well…she was expecting too much.  All he did was lift a brow and fold his arms over his chest.  “Okay.  So is that a problem for you?”

“A problem?”  She shoved a hand through her hair and shook her head.  “Damn it, Law.  He kissed me!  A week ago he was out here grilling you about me and today he thinks it’s okay to kiss me?”

“Actually, a week ago, he wasn’t grilling me about anything.”  Law’s mouth softened in a smile.  “He just wanted to…”

She grimaced.  “Find out things he had no right finding out.”

Law sighed.  “Hope, he already had most of it figured it.  He just wanted to make…hell.  Look, cut him some slack.  The guy was in one shitty place—I get the feeling he was…” He scowled, a dull red flush climbing up his cheeks.  “Damn it, this is like giving a kid sister dating advice or something.  Look, I think he’s been attracted to you like from the get-go, but can you figure out where that put him?  Whether we like it or not, somebody did a damn good job trying to set you up and I hate it like hell, but what kind of man would be if he turned a blind eye to his job just because he thought the girl involved was cute?”

Hope blushed and looked away.  “I’m not…” then she stopped herself.  The hell she wasn’t mad about it.  But she understood what Law was getting at.  “I understand he had a job to do—I do. I don’t have to like it, but I understand it.  Still, this is giving me whiplash.”  Looking down, she stared at the healing scars on her wrists.

Gingerly, she touched one, winced at the lingering pain.  She’d carry those scars for life, forever carry that reminder that somebody hadn’t just tried to kill her, but they’d tried to do it in a way that had made the past two years of her life a lie.  So what if she’d spent them running—she’d left her husband, that bastard who’d tried so hard to destroy her?

She was trying to be strong…and these marks were done to make her look like a coward.

Heaving out a sigh, he lifted a hand.  She placed hers in it and he tugged her close, tucking her up against his chest.

One Reply to “Saturday Snippets…Friends”