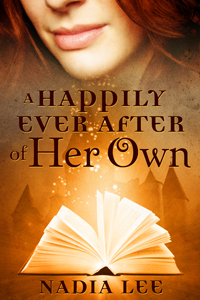 In many fairy tales, princes and/or princesses are usually cursed and/or punished in some ways over an unkind or rude deed. For example, in Disney’s edition of Beauty and the Beast, the Beast paid the price because he refused to allow an old woman a night’s shelter.  In Sleeping Beauty, the wicked fairy cursed the baby princess over a snub.  In Rapunzel, a witch takes a baby girl because the girl’s parents stole the witch’s vegetables.

I decided to create a reason for the Beast’s curse in my retelling A Happily Ever After of Her Own. But since it’s a light story, I didn’t want the cause to be a theft or something dark that might portray the Beast as an unworthy hero.  Since the plot also deals with some deeply dysfunctional fairy tale families, I had to come up with something that touched upon that as well.

So what was the cause for the Beast’s punishment?

“Leave her out of this. Your quarrel is with me. You’re still upset I called you Auntie Beet.”

“Oh, is that what you think?” The Evil Witch’s shrill laugh scraped over his nerves like sandpaper. “I’m not upset, my darling. I’m livid. Beets are the most grotesque, objectionable vegetables in the world. They’re more reviled than mushy, overcooked brussel sprouts. You weren’t just mocking a bad dye job. You were calling me smelly and disgusting!”

“By all the gods, I was nine! This is no longer funny.”

“For once you’re perfectly correct. It is most definitely not funny. So we’re going to make it serious.”

There you have it. The Witch was upset because her vanity was wounded.  🙂

If you had a magical power to curse anybody for any kind of offense, what kind of curse would you put them under and for what offense?  Answer for your chance to win an ebook copy of A Happily Ever After of Her Own.  (Open international; available in prc, epub or pdf.)

Bilingual former management consultant Nadia Lee has lived in four different countries and enjoyed many adventures and excellent food around the globe. In the last eight years, she has kissed stingrays, got bitten by a shark, ridden an elephant and petted tigers.

She shares an apartment overlooking a river and palm trees in Japan with her husband, winter white hamsters and an ever-widening pile of books. When she’s not writing, she can be found digging through old Asian historical texts or planning another trip.

Nadia is giving away one download of her story…open internationally.