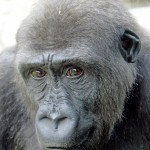 Today’s WW is from my twitter pal, Amy Ruttan.  Don’t mention gorillas…oh, never mind.  I will.

She was asking what would scare a swan (I think it was swans).  I told her a gorilla would do the trick.  But she said she didn’t think gorillas roamed around regency England.

Well.  She shoulda been more specific.  😉  A gorilla WOULD do it, I bet.  Now we tease each about gorillas.  I even referenced a gorilla in If You Know Her while thinking of her. 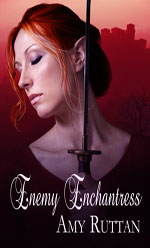 What’s the one thing that remains unchanged during your writing process, from one book to another?  (ie: Intensive plotting?  Music?)

A: Background noise, mostly music playing. I can’t write without music. If it’s dead silence, I don’t write. I need some kind of background clutter to help me focus. I have playlists, lots and lots of playlists for different moods and different manuscripts, so I’m glad MP3s were invented or my house would be filled with CDs.

What’s the one piece of advice you’d give a new writer?

A: Always strive to learn new aspects about your craft. It helps keep the Muse, and your writing fresh.

What’s the one piece of advice you wish was wiped from the minds of writers everywhere?

A: I think I have to agree with Lynn Viehl about erasing that old saying of write what you know from writer’s minds, if I did that my books would be pretty damn boring recitations about the legal system in Canada from a Law Clerk’s POV. Don’t be afraid to create new worlds, write what excites you. If you love what you write it will shine through.

What’s the one book you think everybody, writer or not, should read?

A: The Lord of the Rings trilogy by J.R.R. Tolkien. He was a master, as was his books.