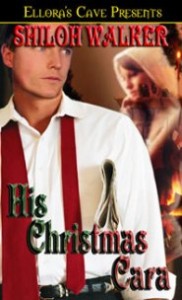 His name was Eben Marley…Ebenezer, to be exact, and for the longest time, he’d lived exactly as the famous scrooge from the old Christmas story.

He did little more than work, and take as many women as he could, trying to forget the one woman who’d walked away from him.

Then Eben met someone who was finally able to break through the ice around his heart. But then he pushes her away.

Now, on Christmas Eve, he has one night, one last chance to make it right.

“So, Jacob… Have you forgotten where I live?” he asked casually, mentally tallying up a mark against Jacob. That’s one. He gave his employees three chances when they fucked up. And three only.

“No, Mr. Marley, I remember where you live,” Jacob said softly, flashing him a dazzling grin in the rearview mirror. “It’s just…time, I suppose…that I do what I’m here for.”

A cold chill ran through Eben at those obscure words. “You’re my driver, that’s what you’re here for. Now take me home, if you like your job.”

Jacob chuckled, a deep, rolling laugh that probably invited others to laugh with him. “This job? Driving you around? No—I don’t care for it, in particular. Wouldn’t be a bad one, heaven knows it’s easy enough. Except you have got to be the coldest man I’ve ever met in my life. And it’s been a long one.”

Eben’s eyes narrowed and he said, “Jacob, you are pushing it.”

The driver laughed. “Boy, you are the one who’s been pushing it. And you’re too damned stupid to even know it, all that money, that brain of yours…shoot, you’re even a good-looking kid,” Jacob mused, shaking his head slightly as he took an exit that led even farther away from Eben’s home. They were close to Louisville Metro’s city limits now, and home was a good twenty miles away.

“Why, thank you. Now turn this fucking car around, take me home and I’ll cut your check. Your final one,” Eben snapped, furious.

Jacob continued on as if Eben hadn’t spoken. “Smart, rich, and you’re good with people, when you want to be. Yet you’re concerned with one thing, and one thing only. Yourself. But that’s okay. That’s why we’re here. To open your eyes. Hold on.”

Eben opened his mouth to bellow…but Jacob wasn’t there. The front seat was empty.

“Mother fuck!” Eben shouted, diving over the seat in a desperate attempt to catch the steering wheel.

The car smashed into something, and Eben went flying through the windshield. How odd…it didn’t even hurt…

Damn it…why now? he wondered and then blackness—

Damn it, she was so sweet, so hot… Eben groaned as she levered up away from him, laving his cock with one last gentle stroke of her tongue before she crawled over him, one knee on each side of his hips.

I could fuck her for the rest of my life and never get tired of her, he thought mindlessly.

A soft, silken voice purred into his mind, then why did you send her away?

He jerked awake, viciously, abruptly, his cock throbbing against his belly, pulsating and aching like a bad tooth. His heart was pounding hard and heavy. And he hurt.

Oh, hell…he hurt. As the dream fell apart around him, Eben grew aware of just how badly he was hurting. And not just his swollen dick, either.

Head pounding, gut churning, body screaming at him in protest, Eben lifted his head, trying to see around him. Too damn dark… What in the hell had happened?

He’d been dreaming, that much he knew. Dreaming about Cara. Again.

But what had happened? Where in the hell was he? Not at home, that was for sure. And why the hell couldn’t he see anything?

Jacob…driving… Where in the hell had he been going?

The pain in his head rose up, damn near drowning him, overwhelming the heat from the dream. As the lust-induced fog started to clear, Eben became even more aware of his pounding head. He pressed a hand to his temple, hesitantly, almost afraid he’d find his skull split open. But there were no bumps, no cuts, no wetness that might indicate he was bleeding.

And he could feel his body. Could move—although he sure as hell didn’t want to.

What had happened? He didn’t remember anything beyond climbing into the car with Jacob—

Jacob had been driving—shit, where in the hell is he?

But it was so black, he couldn’t see. It wasn’t even the black of night. It was the black of a cave, deep in the depths of the earth, the total absence of any light. “Jacob?” he tried to call.

But his voice was barely a whisper. Licking his lips, he started to pat his pockets. There was a light on his cell phone… He could use it to find Jacob…

Memory rushed back and he froze.

Jacob had disappeared. Right in front of Eben’s eyes, right after the man had said, Hold on.

And as his mind tried to wrap itself around that concept, he started to fall.

A harsh curse escaped him, his body tensing with fear. Arms flailing, he tried to grab onto something, to anything. But there was nothing there.

And still, he continued to fall, his clothes flapping around him, his hair streaming into his eyes, the wind striking his face.

Down and down, until his descent finally seemed to slow, and his clothes stopped flapping. That was the first sign that he might be slowing down—his clothes drifting loosely around him, his hair blowing around his face instead of slapping and stinging his skin and eyes.

A few moments later, his feet landed on the ground. Eben blinked. There was light now, bright blinding light, where moments before, there had been none. It grew brighter and brighter as he stared into it, until, like the sun, it eclipsed, and the light softened.

Now a warm, amber glow cast its light on everything.

Finally able to see, Eben turned and looked around him. He was in a room. Or he thought he was, although there were no doors, no windows. And when he looked up, trying to see where he had fallen from—just a ceiling, a domed, smooth shape that stretched maybe twenty feet over his head.

Bad enough that he’d fallen, now he couldn’t see where he’d fallen from. He could have handled that. And he could have figured out how to explain his being in this room, although there was clearly no way out. Like he had been put in a box as the box was being constructed around him.

Yes, he could handle that. Figure it out. Deal with it.

But the soft laughter that was echoing through the room, that was a little harder to understand.

Because he knew that laugh.

And the person it belonged to was dead.