Since it’s October, and that’s Halloween, it seems I should feature a spooky(ier) title.  How about Talking with the Dead? 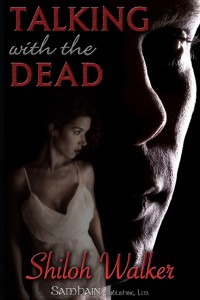 With his gift, he talks to those who’ve died violently and seeks out their killers. Only once he’s found the murderer, can the victims be at rest. After his last case, the only thing he wants is peace and he hopes to find it in the small town of Mitchell, Indiana.

But something is horribly wrong—the dead are waiting for him there, as well.

Small town sheriff Daisy Crandall is frustrated. The murder investigation she’s leading is going nowhere, the few leads she’s had haven’t panned out. She needs a break—this case is personal and when a stranger arrives, turning up where he shouldn’t be, she’s suspicious. Finding out that he is more than what he appears to be, should shock her but doesn’t. The fact she’s highly attracted to him at the worst possible time is a hindrance.

Daisy had to stifle the urge to snarl in pure frustration as the last possible lead she had on the killer who had killed four women in her town came up empty. Nothing. Yes, Kelsey Morrow told her, she had seen a car that night before she called him. But it was so dark…and she couldn’t tell a Trans Am from a Camry, Kelsey relayed mournfully. She thought it was a four door—maybe. And the color was dark. But dark blue, dark green, gray…black…

Why, on earth, did the one woman who had seen the probable killer have to be Kelsey?

She was a sweet enough girl, and Daisy loved her dearly—after all, they were stepsisters.

But Kelsey was an airhead. Talking to her made Daisy as dizzy as a whirlwind. Daisy tugged on her braid in a gesture born of nervous habit as she muttered to herself, lowering her gaze back to the papers, reports and pictures spread out in front of her.

An hour later, she had poured through the scant file on Tanya Dourant and she came back to the conclusion that she had already reached.

Taken from her home, late at night, no signs of struggle in the house—and on the one night that her husband had been out bowling like he did every Wednesday.

She had known her killer.

Some son of a bitch had bled her like a damned pig.

Rubbing her thumb along one of the pictures, she studied it. That bright, happy grin made her heart hurt. Thinking about those little kids, asking for Mama day after day, and Daddy having to explain she wasn’t ever coming home again.

Fury pulsed through her and she shoved back from the chair, pacing the small office and turning it over in her mind.

“Something. Has to be something,” she muttered. Gritting her teeth, she lowered herself back into the chair and grabbed the first thing that came to hand. It was a crime scene photo of the empty field where Tanya’s body had been dumped.

“Waste of time, going out there again.” Then she shrugged and stood, grabbing her jacket on her way out the door.

Not that staying in the office was terribly productive right now.

The road was paved up until about a mile from the field. Tanya had been found by some hunters, a week after being reported missing. The hunters had known who it was. Daisy had seen the knowledge, the fury, the shock, in their eyes as they led her back out there.

As Daisy had expected, the official cause of death was hypovolemic shock, caused by massive blood loss. There had been thirty-six cuts, all inflicted by the same blade. Most likely the same knife that had been used on the other victims. They had all been cut thirty-six times as well. There was nothing careless or uncontrolled. The victims hadn’t been stabbed violently, but cut with a careful precision.

Also like the others, Tanya had been raped. He had also spent some time strangling her. He’d squeezed her throat until she blacked out from the lack of oxygen and then he’d let her go. Let her wake up. And then he’d start all over again.

All of that, and he hadn’t left a single sign of himself. Not a hair follicle, not a bit of skin under the fingernails, not a drop of semen or blood. He left nothing and Daisy had come up with nothing.

The instincts that had helped her nab some of the biggest drug runners in Louisville had deserted her. Not even a quiver as she walked the trail back to the field. Her gut had been playing tricks on her for a while, but now it was like she was working blind. No gut urges, no hunches to follow.

Just four dead bodies…and a stranger standing in the meadow where the last body was found.

It was the guy from the diner. He stood there, facing away from her, staring down at the ground. There was a knapsack slung over one big shoulder. It had a worn look to it, like it had been used a lot. Other than the bag, his hands were empty. But his clothes were dusty, like he had been kicking around the field for quite a while.

Twilight was starting to gleam gold on the horizon as Daisy calmly shifted the gun she wore inside her jacket. Hadn’t ever gotten used to wearing a holster at her waist the way her predecessor had. Too many years working in narcotics, she supposed.

The blue eyes that cut her way were the color of the sky just before sunrise. Deep, dark blue. And cool. Very cool. She hadn’t noticed the color of his eyes back at the diner. Neither had she realized just how very…large he was.

Six feet four, easy. Shoulders that would have done a linebacker proud. High cheekbones and a chiseled chin. The only things that saved him from being too pretty were his hard, unsmiling mouth and his eyes. He had the saddest eyes that Daisy had ever seen.

“I’m sorry,” he said, his voice a low, easy drawl that spoke of the South. “Just out seeing the sights. Saw the road. I wanted to take a look around.”

“Look for…what, exactly?” she asked, suspicion in her gut. Sad eyes or not, there was no way he had just happened upon this place. The field was too damn far out for somebody to stumble on to it. The path to it was overgrown and unless somebody knew it was there, it wasn’t going to be easy to find.

He lifted the bag at his side and smiled, but it wasn’t a real smile. It wasn’t reflected in his eyes, or on his face. Just a polite little smile to set people at ease, she suspected. But she wasn’t put at ease. Not at all.

“Scenery. I’m an amateur photographer. On vacation, wanted to find someplace quiet.” His voice was soothing, the kind of voice that tended to reassure people.

Daisy wasn’t looking for reassurance. She was looking for answers and she wanted to know what in the hell he was doing standing in the middle of her crime scene.

For a brief second, she entertained the possibility that this was her guy. It wasn’t unusual for killers to revisit crime scenes—could explain why he was at the site where they’d found Tanya. He definitely had the weird, mysterious vibe to him. But it wasn’t him. She didn’t know why he was here, but it wasn’t because he wanted to see if his victim had been found yet.

So instead of calling for back up, she just said, “Mitchell has plenty of nice places. And a lot of them aren’t on private property. Maybe you should find of one of them.”

That same polite little smile, and he nodded. “Of course. Hope I didn’t cause trouble, Sheriff,” he said. And then he was gone, moving past her on incredibly silent feet.

Daisy fought not to scowl as he headed for the trees, that black bag slung over his shoulders, his hands tucked into his pockets, broad shoulders straining at the seams of his worn denim shirt.

Then she mentally slapped herself across the head, turning back to study the field with narrowed eyes.

She slid her gaze back in the direction where that sexy stranger had disappeared. Blowing a breath out, she started to jog across the field, catching sight of that faded blue denim. “Hey…hold up a minute.”

It’s in ebook & print and you can read another excerpt here.

4 Replies to “Talking with the Dead…October’s Featured Title”